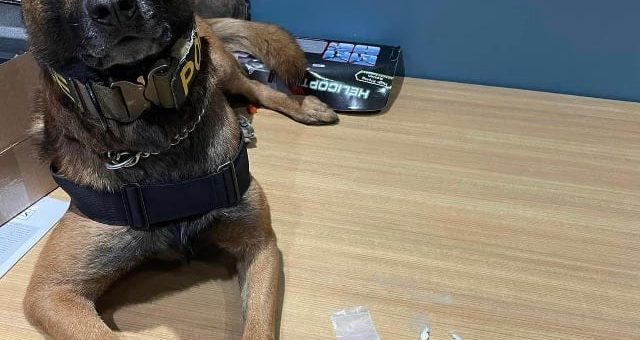 MITCHELL – Three people were arrested on Friday, November 26, after a Mitchell Police officer attempted to stop a vehicle on Rariden Hill Road for failure to use a turn signal when turning from State Road 37. The officer lost sight of the vehicle and parked in the Tieman Tire parking lot waiting for the vehicle to return. It did three minutes later. The officer then followed the car onto State Road 37 and initiated a traffic stop.

The vehicle rolled for about 700 feet before coming to a complete stop.

Officers then asked for identification from everyone in the vehicle. Fife told the officer she didn’t have any and her name was “Hannah”.

Police say all three occupants of the vehicle appeared nervous.

Canine Koah alerted police to drugs in the vehicle.

Deckard told police he did have syringes in the vehicle that he used to inject viagra which he had a prescription.

During a search of the vehicle, police found several syringes and a bottle of viagra. Two of the used syringes tested positive for meth.

Fife told the officers they turned on Rariden Lane when they noticed a police officer behind their vehicle. She told the officer she used her sister’s name because she was wanted on a warrant in Monroe County.

All three were detained.

When an officer arrived with Fife at the jail they noticed she had slipped one of her hands out of the handcuffs. Stuffed in the back seat of the police car, the officer found two baggies. Fife told the officer she was able to slip her hand out of the handcuff and retrieve the two baggies out of her bra and stuff them in the seat. She admitted she put them there because she was scared.  One baggie contained .55 grams of meth and the other contained 1.15 grams of cocaine.