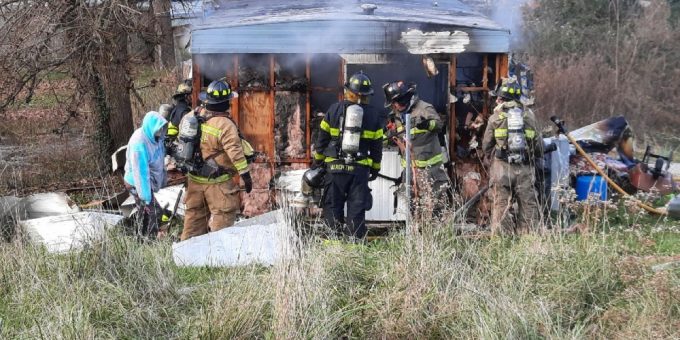 MITCHELL – On Saturday, November 27th at 8:04 a.m. Marion Township Volunteer Fire Department was dispatched to the odor of smoke and smoke detectors sounding at a mobile home at 1661 Meridian Road.

While responding Engine 52 asked for Huron Volunteer Fire Department to be put on standby for tanker support.

Engine 52 arrived on the scene at 8:15 a.m. and reported a working structure fire and to start Huron and Mitchell Fire Departments for additional manpower and tanker support.

“Huron was not contacted till later by units on the scene. Unsure of the reasoning behind the delay from scene to dispatch for the tanker support,” said Chief Paul Gillespie. “Crews on the scene immediately secured the natural gas utilities and asked dispatch to contact Duke for electrical disconnection.”

Chief Gillespie reported conditions inside the mobile home quickly deteriorated to the point that crews had to be pulled from an interior attack and take a defensive stance.

“Crews used hydraulic ventilation to clear the smoke to locate the seat of the fire and the fire was brought under control,” said Chief Gillespie.

There was one woman and her dog who lived in the home. She was checked by EMS at the scene and refused any further treatment.

“On-scene command requested Red Cross to assist the homeowner and they were of no help throughout the incident,” added Chief Gillespie. “Crews on scene salvaged what items they could for the occupant and assisted loading them into her vehicle so she could stay with a nearby neighbor temporarily.”

Firefighters remained on scene until 11:11 a.m. for salvage and overhaul.

The fire remains under investigation but Chief Gillespie believes it to be electrical in nature.