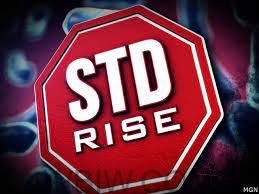 As of October 3, 2020, 892 cases of syphilis have been reported in Indiana, an increase of 22 percent from 2019. So far this year, 70 of Indiana’s 92 counties have reported at least one case of adult syphilis, and 24 counties have recorded increases of at least 50 percent from the same timeframe last year— with notable increases in Allen, Clark, Delaware, Johnson, Madison, Marion, Scott and Tippecanoe counties.

Syphilis is a sexually transmitted infection that can cause serious health problems and can spread to the brain and nervous system if left untreated.

To help prevent the spread in Vanderburg County the Health Department will offer treatment to patients at no cost.

Common risk factors seen in the outbreak include homelessness, exchanging money or drugs for sex, using methamphetamine, injection drug use, using social media/internet to meet partners, and incarceration within the last year.

Additionally, officials report, this outbreak has been linked to exposures to other infectious diseases, including HIV and viral hepatitis (hepatitis A and C).

Anyone who has been exposed to syphilis or meets any of the risk factors listed above should contact a healthcare provider for screening and treatment options.

Health leaders say pregnant individuals should be screened for syphilis in the first trimester or at their first prenatal visit, between 28- and 32-weeks’ gestation and at delivery.

STDS surge for the fifth straight year, reaching an all-time high in 2018.

Do the CDC’s numbers paint an accurate picture of the extent of the STD infections now underreported due to insufficient pandemic-era testing?

During the pandemic, many testing labs lacked sufficient personnel or had to shift focus entirely to Covid-19 in an attempt to keep up during the deadly surges. This led to serious under-testing at what amounted to a high-water mark in STD infections nationwide.

Understanding that people did not stop having sex during the past year, experts fear that the lack of normal access to STD testing and treatment likely means infection rates are, if anything, higher than they appear in these latest reports. As recently as January 2021, a survey revealed that over a third of staff in STD testing programs at the state and local levels have needed to remain focused on Covid-19.