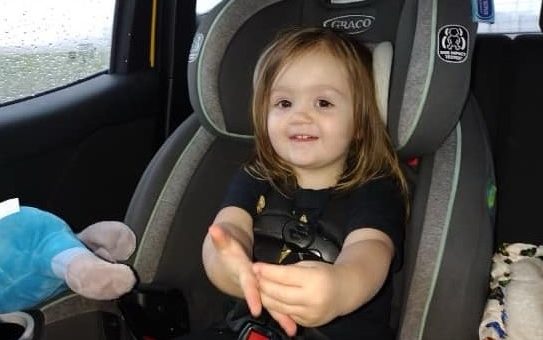 The Bartholomew County Sheriff’s Office, Indiana State Police, DNR, and several fire departments picked up their search for the missing toddler using boats and divers in the East Fork of the White River while dozens of firefighters combed through nearby fields.

Early Saturday morning, a jacket with butterflies that Emma was last seen wearing was found about a mile from where her father’s car entered the river.

“With the coat being found downstream and talking to Emma’s father, we can’t say 100 percent but it’s looking more like she’s probably in the river someplace,” Batholomew Sheriff Matt Myers said.

Emma and her father went missing around noon on Wednesday, November 24th. They were last seen in Jeremy Sweet’s black Ford 150 pickup truck.

On Friday, November 26th, duck hunters discovered a truck partially submerged in the river off of a farm lane near Beatty Lane and Blessing Road. Inside was Emma’s father, Jeremy Sweet, but his daughter was nowhere to be found.

Jeremy Sweet was inside the truck and suffering from exposure and hypothermia. He was taken to Columbus Regional Hospital for treatment.

A syringe was discovered on Sweet at the hospital and his family told police he has a history of drug use.

Jeremy Sweet was charged with unlawful possession of a firearm by a serious violent felon as well as possession of meth and is currently on a 72-hour hold.

Sheriff Myers says Sweet has given several conflicting stories about what happened to Emma.

“Jeremy said he had dropped Emma off at Casey’s. Right after that, he says she was on the hood of the car of his vehicle her coat was wet so he took the coat off and that’s where she got swept away,” Sheriff Myers said. “There are really three stories now and none of them match.”

Sweet’s car was pulled from the river Saturday, November 27th, and is being taken to a secure location. Sheriff Myers says they’re working to get a search warrant so they can look through the car more thoroughly.

Myers says they’ve received an outpouring from the community wanting to come and help with the search. However, he says right now they have things under control and are doing everything they can.

“We want to bring Emma home to her family,” Sheriff Myers said. “I think the family knows it’s going to be more of recovering a body and I think they understand that.”