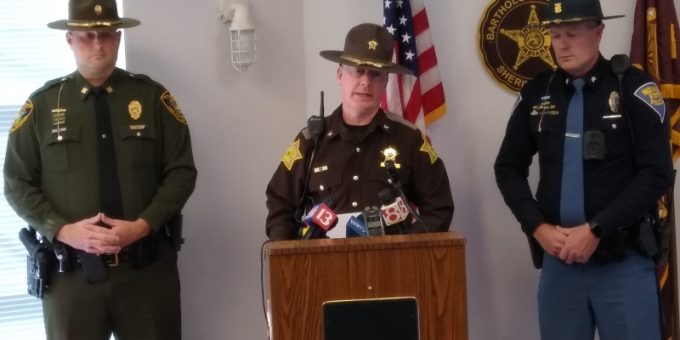 BARTHOLOMEW CO. — The body of missing 2-year-old Emma Sweet was found in the White River on Sunday.

Crews have been searching for Emma since Friday when her father’s truck was found in the White River.

“In the 30 years I have been involved in law enforcement, I have never seen a group of men and women work as hard as we have to find this young girl,” Sheriff Matt Myers said during a press conference on Sunday.

“It is a bitter-sweet day, what I mean by that is I am very proud of the men and women who did what they had to do on a holiday weekend, but my heart goes out to the family, ” added Sheriff Matt Myers. “When they first found out our chaplains were there and we were able to pray with them and there were some tears shed by the family and shed by the first responders. It affects all of us. None of us have slept. None of these men and women were going to leave before finding her. I keep thinking about the family and this beautiful beautiful girl. This day is about Emma, not Jeremy Sweet. Emma (body) will talk to us and we will find out more from her as this investigation goes on.”

Emma’s body has been released to the Bartholomew County Coroner who will determine her exact cause and manner of death.

“Please watch what you put on social media and have empathy for the family,” he added.

Emma’s uncle, Brian O’Neil thanked all agencies and the community for their overwhelming support during Sunday’s press conference.

“Thanks for bringing her home,” he added.

The Bartholomew County Sheriff’s Office, Indiana State Police, DNR, and several fire departments picked up their search for the missing toddler Sunday morning using boats, sonar, and divers in the East Fork of the White River while dozens of firefighters combed through nearby fields.

Early Saturday morning, a jacket with butterflies that Emma was last seen wearing was found about a mile from where her father’s vehicle entered the river near Southern Crossing, which is County Roads 400 South and 450 South.

Emma and her father went missing around noon on Wednesday, November 24th. Emma’s mother filed a missing person’s report on both Jeremy and Emma that day. They were last seen in Jeremy Sweet’s black Ford 150 pickup truck.

On Friday, November 26th, around 6 a.m. duck hunters discovered a truck partially submerged in the river off of a farm lane near the 1700 block of Blessing Road near Beatty Lane. Inside was Emma’s father, 39-year-old Jeremy Sweet, of Columbus, but his daughter was nowhere to be found. The area where the truck was found required going off-road, around barriers, and down a 15 to 20-foot embankment into the river.

Jeremy Sweet was inside and suffering from exposure and hypothermia. He was taken to Columbus Regional Hospital for treatment.

A syringe was discovered on Sweet at the hospital and his family told police he has a history of drug use.

Jeremy Sweet was charged with unlawful possession of a firearm by a serious violent felon as well as possession of meth and is currently on a 72-hour hold while he continues being treated at the hospital and is listed in serious but stable condition.

Sheriff Myers says Sweet has given several conflicting stories about what happened to Emma.

“Jeremy said he had dropped Emma off at Casey’s. Right after that, he says she was on the hood of the car of his vehicle her coat was wet so he took the coat off and that’s where she got swept away,” Sheriff Myers said. “There are really three stories now and none of them match.”

Sweet’s car was pulled from the river Saturday, November 27th, and is being taken to a secure location. Sheriff Myers says they’re working to get a search warrant so they can look through the car more thoroughly.

Myers says they’ve received an outpouring from the community wanting to come and help with the search.