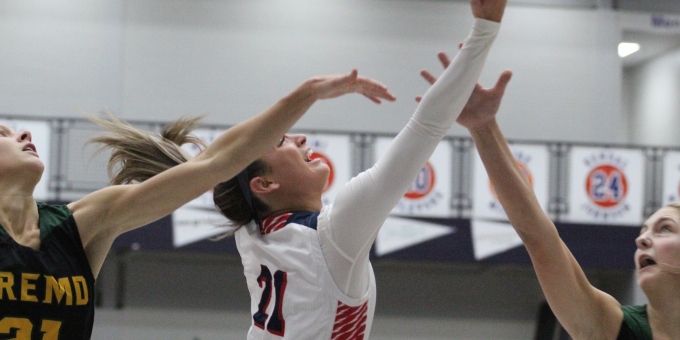 BROWNSBURG – Reputations travel at the speed of social media, and the toughest part of David Yates’ preparation for Fremd’s clash with high-profile Indiana power Bedford North Lawrence was selling his team on the vulnerability of the unknown opponent with well-known tradition and talent.

His Vikings, off to a scuffling start as the injury-plagued defending state champion in Illinois, bought it, cashing in defensive toughness for an interstate victory. They caught a rabbit, forcing the Stars to shoot like hounds dogs. That was no Fremd of anyone as BNL went home to cry a little with its first loss.

Fremd’s Anna Schmitt hit a go-ahead free throw with 18.9 seconds left, and BNL failed to convert two late possessions as the Vikings clawed out a tense 41-40 win over the Stars in the sixth game of the Sneakers for Santa Shootout at Brownsburg on Saturday night.

Fremd (4-2) conquered the Stars, ranked No.3 in Class 4A, with balance to offset the double-barrel scoring attack on BNL’s end. BNL stars Karsyn Norman and Chloe Spreen combined for 31 points, but the other chambers failed to fire, and the Stars struggled to convert shots at their normal clip. That included more than a few point-blank layups. Credit Fremd, with long and lean defenders, for causing angst and chaos.

BNL (6-1) had its last-minute chances. Trailing 40-38, Spreen slashed through the defense with a layup with 20 seconds left. Schmitt was fouled seconds later, and she made the first 1-and-1 chance at the line. When she missed the second, the Stars had a shot at control, but Spreen fumbled the ball away in the paint.

Schmitt was fouled again with 2.9 seconds left, but she misfired. After a timeout, going the length of the court and executing perfectly, BNL’s Carlee Kern rifled a pass to Madisyn Bailey in front of the BNL bench on the opposite end. Her 30-footer at the buzzer, on target, rimmed out as Fremd celebrated a confidence-building triumph.

“You show up to one of these games, and you watch film, but what can you see on film that truly translates until you get out there?” Yates said. “Our kids realized we could play with these guys. That was my hardest selling point.”

That point was made quickly. The Vikings hit two treys and darted to an 11-5 lead.

BNL’s best minutes followed, an 11-0 run. Norman converted a steal for a layup to close the first quarter, Spreen opened the second with a 12-foot fader on the baseline, and Norman cut to a layup off a Spreen pass. Spreen added a 10-footer in the lane and a wing drive to a 3-point play for BNL’s biggest lead at 16-11.

But if anyone thought Fremd wasn’t high class, that was a lie. The Vikings answered with six straight points. Norman’s spinning layup and Spreen’s free throw gave the Stars a tenuous 19-17 advantage at the half, setting the stage for a back-and-forth battle that featured six ties and six lead changes after intermission.

Point and counterpoint. Norman’s trey and lane jumper were answered by Schmitt’s baseline weave. Bailey’s dash to a layup (off a Spreen pass) was erased by Maddy Fay’s layup in the paint as BNL took a 30-29 lead into the fourth quarter. Mallory Pride and Spreen scored for a 36-34 lead, but Jill Sheehan buried a wing bomb. Norman’s steal for a layup gave BNL a 38-37 lead, but Fay got loose for another basket in the lane. That set the stage for the frantic final minute.

“Every run BNL had, our kids answered,” Yates said. “Our kids just kept figuring out ways to attack.

Fay, a 6-2 left-hander in the post, made the most plays, scoring 11 points and grabbing 8 rebounds. Ella Todd, a talented freshmen assigned the task of staying with Spreen, added 9 points. Fremd was guilty of 18 turnovers, but BNL was scatter-gunned in its shooting response, converting a miserable 36 percent (including 3 of 15 from distance).

“We struggled to make shots,” BNL coach Jeff Allen said. “And we had some good looks that they just didn’t get down. We didn’t have a good game, and playing a good team, you have to be happy to give yourself a chance to win. So I’m happy with that.

“I’m not happy withn the way we played offensively. Holding them to 41 points is not a bad job. But we could do a lot better job on the offensive end. We made rushed decisions. We looked frazzled a few times, which is not typical of us.”

Norman had 18 points after scoring BNL’s first 7. Spreen finished with 13. Everyone else combined to hit only 4 of 20 shots, which played directly into Fremd’s plans.

“Our goal was to hold Norman and Spreen around 30,” Yates said. “Let’s force some of those other kids to beat us. That’s a good strategy. Our kids play hard. We have some athletic kids. And we have size.”

BNL will have little time to recover from the disappointment. The Stars will get back to serious business when they visit Jennings County for a huge Hoosier Hills Conference clash on Tuesday.

“We’ll learn from it,” Allen said. “When we didn’t make shots early, it affected us on the offensive end. And we didn’t come out of it. Sometimes this type of game is not a bad thing. You learn a lot about yourself in a one-point loss on the road.”