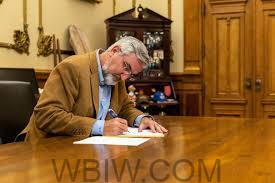 INDIANA — Indiana’s Governor Eric Holcomb said Wednesday he would extend the state’s public health emergency for another month amid a stalled proposal that would force businesses to grant COVID-19 vaccination requirement exemptions without any questions and block similar immunization rules set by state universities.

“Last week I made clear what would be necessary to responsibly allow the state public health emergency to expire. However, following the announcement that the General Assembly will not return on Monday, Nov. 29, I plan to extend the state public health emergency and the executive order next week for another 30 days to preserve the necessary provisions. I will continue to work closely with Speaker Huston and Senator Bray as we move into the next legislative session.”

Lawmakers were set to meet in a special session next week to vote on the fast-track bill. But leaders called the plan off following seven hours of heated public testimony and a lack of agreement Tuesday on the bill.