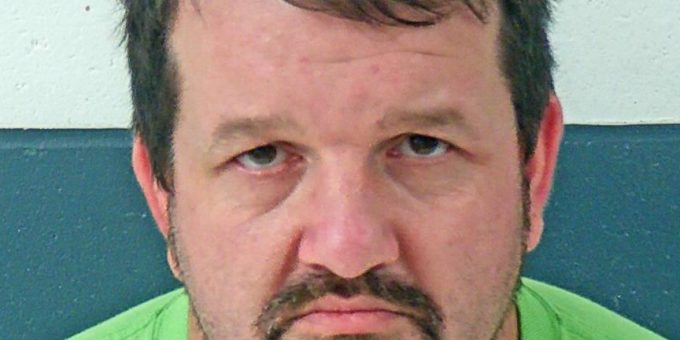 BEDFORD – A Mitchell man was arrested on numerous charges, including an outstanding warrant, when Bedford Police Officers were called to Walmart Tuesday afternoon after a report violating a no-trespass order.

When police arrived they learned that 39-year-old Edward Parker was also wanted on a warrant for a previous theft from the store.

When officers arrived they found Parker sitting in the passenger seat of a vehicle parked in the parking lot.

Parker was removed from the vehicle and detained on the outstanding warrant. Parker said he was at the store to cash a check.

Bedford canine Zazu then alerted officers to drugs in the vehicle

During a search of the vehicle, officers located a plastic baggie containing 2.9 grams of crystal meth in Parker’s cigarette pack.

Inside a duffle bag belonging to Parker, officers found two glass smoking devices and other drug paraphernalia. Parker was arrested on charges of possession of meth, criminal trespass and on warrants for leaving the scene of an accident, theft, and two warrants for failure to appear.

The theft charge stems from an incident on May 8, 2021, after Bedford Police officers received a report of a theft from Walmart. Employees at the store were able to identify the male as Parker. Parker was caught stealing items after an access protection employee attempted to stop Parker to conduct a receipt check. Parker then fled the store.

Employees knew Parker because he had stolen from the store in the past.

During this incident, Parker placed a package of razors inside an expandable hose. He also placed a $1 dinosaur toy UPC on a more expensive dinosaur toy and scanned it. He also failed to scan a bag of dog food.

During a later interview with police, Parker admitted to the theft.

Parker was also charged with leaving the scene of an accident on August 8, 2021, after Lawrence County Sheriff’s Department deputies responded to a single-vehicle property damage accident on US 50 East and Deer Creek Estates.

The department was alerted to the accident by OnStar and they informed police Parker was the driver. While en route, Parker had fled the scene on foot.

Witnesses to the crash told officers they saw Parker’s vehicle leave the roadway and Parker walking through a field.

Police say Parker was traveling west on US 50 in a Buick Envision when he drove the vehicle off the roadway skimming a utility pole and then continued to travel east through the grass. He then struck a road sign for Deer Creek Estates and then another utility pole.

The vehicle was towed from the scene.

The information was forwarded to the Lawrence County Prosecutor’s Office and a warrant was issued for Parker’s arrest.

Police contacted the female owner of the vehicle who told police Parker told her he had fallen asleep while driving and that he left the scene because he didn’t have a valid driver’s license and had several warrants for his arrest.