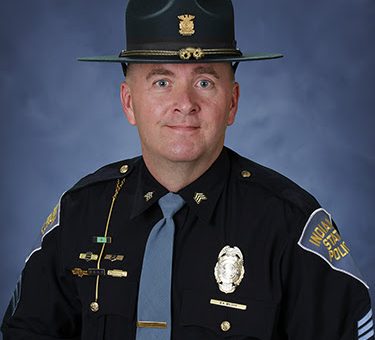 INDIANA -The Superintendent of the Indiana State Police, Douglas G. Carter, has announced the promotion of Sergeant Brian K. Wilson to the rank of First Sergeant. Wilson will serve as the Operations Center Section Commander and oversee the various components of the Operations Center.

Wilson, who is originally from Whiteland, Indiana, is a 1989 graduate of Whiteland High School, and in 1991, he earned an Associate’s Degree in Law Enforcement from Vincennes University. He began his law enforcement career in 1991 with the Columbus (IN) Police Department.  On June 4, 1995, he graduated from the 52nd Indiana State Police Recruit Academy and was appointed as a Trooper assigned to the Indiana State Police Post in Lafayette where he served for two years. In 1997 he transferred to the Seymour Post and served as a Trooper until being promoted to the rank of Sergeant in 2003. He continued to serve as a District Squad Sergeant when the Seymour Post was closed and merged with Versailles in 2010. In 2018 Wilson transferred to the Operations Center in Indianapolis.

Wilson and his wife Melody are residents of Johnson County and have four grown children and one grandchild.