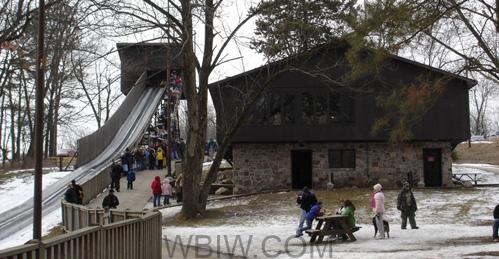 Riders drop 90 feet over the distance of a quarter-mile in this exciting thrill ride.

Pokagon State Park’s refrigerated Toboggan Run near Angola, Indiana, has about 90,000 riders every season. With the 30-foot tower and dips and valleys, the total vertical drop is 90 feet over the course of a quarter-mile. The top recorded speed is 42 mph. It’s a 20 to 30-second thrill ride.

The slide got its start in 1935 when the Civilian Conservation Corps Company 556 built a wooden toboggan run for their own fun. The first run had a huge curve halfway down and then, near the inn, curved toward Lake James. The following year, the track was straightened to increase speed. In 1938, Company 556 erected a taller tower of about 20 feet. A second track was added in 1940.

In 1971, the slide became refrigerated. The design at that time now seems a little primitive compared to today. The old wooden tower and concrete began to deteriorate and the current 30-foot tower and track were added in 1974. In 1984, work started on renovating the two tracks. At the same time, a new rental and warming center was built. The new track did not reopen until Thanksgiving 1986. Additional work was done in 1998. More about the run’s history.

The Toboggan has extended hours during winter break and is open on New Year’s Day, Martin Luther King Day, and Presidents’ Day. View the daily schedule below for holiday hours.

Fees are subject to change without notice.