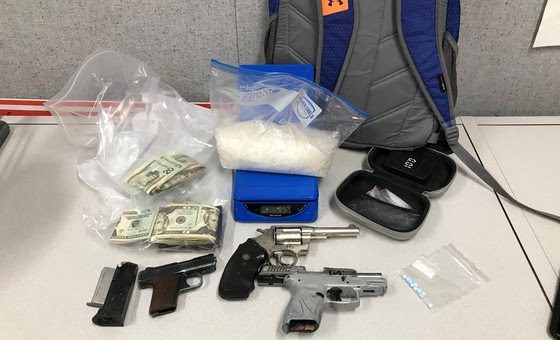 SEYMOUR – Monday, a traffic stop by an Indiana State trooper on I-65 near Seymour, Indiana led to the discovery of a large amount of suspected crystal meth, additional drugs, guns, and money.  The discovery resulted in two White County, Indiana residents being arrested on numerous charges.

The incident began around noon when Trooper Randel Miller conducted a traffic stop on a Chrysler 300 on I-65 Northbound near the 48-mile marker, just south of the Seymour exit for multiple traffic violations.  During the traffic stop, Trp. Miller became suspicious that criminal activity was taking place.  He deployed K-9 Jinx who alerted him to the odor of illegal drugs in the vehicle.

Both Doornbos and Balser were transported to the Jackson County Jail where they were incarcerated pending their initial court appearances.