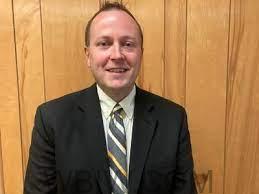 WASHINGTON – Kevin Frank has been named the new superintendent of Washington Community Schools.

Frank will assume his leadership duties on July 1, 2022.

Frank is replacing Superintendent Dan Roach who recently announced his retirement after serving more than 42 years in the education field.

Frank has served as an assistant superintendent of Washington Community Schools since 2015.

Frank began his career in public education as a math teacher and basketball coach and was then named assistant principal and high school principal at Eastern Greene schools.