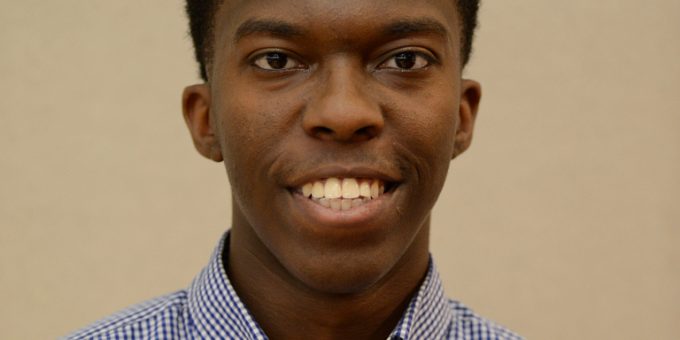 BLOOMINGTON – Indiana University senior Elvin N. Irihamye, who has played a key role in published brain research and demonstrated a passion for helping others through nonprofit work and student government roles, is one of 32 U.S. students chosen as a Rhodes Scholar. In October, he will go to the United Kingdom on a renowned scholarship to study at the University of Oxford.

A resident of Sammamish, Washington, and a native of Rwanda, Irihamye has a love of natural science and a desire to translate the scientific method into applied purposes. He is a co-author of three scientific papers in peer-reviewed publications relating to cancer chemotherapy treatments. Research on potential therapeutics for auditory-related chemotherapy side effects was published in Neurotoxicity Research. His research also has been published in the journals Nature and Cells.

“Elvin Irihamye is a brilliant scholar with a bright future,” Indiana University President Pamela Whitten said. “His service to others through his nonprofit organizations and student government involvement is especially impressive. Indiana University is proud to have him as a student, and we celebrate his tremendous achievement of being named a Rhodes Scholar.”

At IU, Irihamye co-founded The Eckford Mentorship Program, a charitable corporation using industry and academic partnerships to strengthen the pipeline of Black, Latinx, and Native American talent into the workforce. He also is active with Create Circles, a nonprofit that connects college students with older adults through virtual visits.

The Rhodes Scholarship is the oldest and most renowned award for international study, created in 1902 by the will of Cecil Rhodes, a British philanthropist, and African colonial pioneer. A Rhodes Scholarship provides all expenses for at least two years of study at Oxford. The total value of the scholarship is about $75,000 per year.

Selection for the award is a two-step process. Applicants first must be endorsed by their college or university, then the strongest finalists are chosen for an interview by a selection committee. This year, more than 2,300 students began the application process, and 826 were endorsed by 247 different colleges and universities.

Below is a list of all of IU’s Rhodes Scholars.