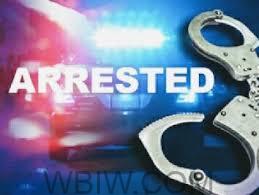 MITCHELL – Four people were arrested Saturday after a Mitchell police officer conducted a “trash pull” at 106 Dale Street in Mitchell.

A “trash pull” is where an officer armed with a search warrant goes through the trash and or premises at a location looking for evidence of illegal drug use.

When officers arrived, two went to the side door of the home and a Mitchell Police officer went to the front door.

Officers announced their presence numerous times and were unsuccessful to get a response.

Barlow admitted to officers they may find marijuana in the home when officers questioned him.

He then stated he had a baggie containing about half an ounce of meth or less in his pocket. Police say the baggie contained 13.40 grams of meth.

“Travis stated he had been wanting to stop dealing methamphetamine, as well as get rid of all the illicit items from his residence. Travis stated he planned on doing this for a while but never got around to it.”

Baker, Swartz, and Hardin will face a charge for visiting a common nuisance.