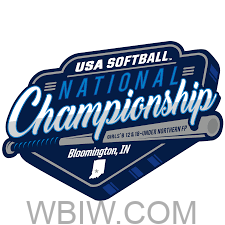 BLOOMINGTON – The Bloomington Parks and Recreation Department and partner Visit Bloomington announced today that youth fastpitch softball teams will once again make the trip to Bloomington in both 2022 and 2023 to compete in USA Softball national championship tournaments.

National tournaments scheduled to take place in Bloomington in 2020 and 2021 were canceled due to the COVID pandemic, but USA Softball is optimistic that participation in youth sports tournaments is on the rise and that players and their families will once again feel comfortable enough to travel and compete.

At the annual USA Softball council meeting this month, Bloomington was awarded the 2023 Girls’ 16-under Class B Fastpitch Northern National Championship. The tournament is scheduled to take place in July 2023.

Communities from across the U.S. vie for the privilege of hosting USA Softball’s national championships every year. The City of Bloomington and Visit Bloomington has successfully bid to host at least one national softball tournament every year since the Twin Lakes Sports Park was completed in 1993, except for 2005.

“After a couple of years without it,  it’s wonderful to have the summer fastpitch tournament to look forward to again,” said Mayor John Hamilton. “Bloomington is especially proud to support young women in sports.  We look forward to hosting them and their families and enjoying the excitement of the tournament for another two summers in our city.”

Each year, the Bloomington Parks and Recreation Department partners with Visit Bloomington to represent the city at the USA Softball Council meeting, where hundreds of cities from across the U.S. showcase their communities’ venues, accessibility, and other assets in the hopes of being selected as a tournament venue.

“Congratulations to the Bloomington Parks and Recreation Department for securing another USA Softball Championship. Successfully recruiting and hosting youth sports tournaments is a competitive and challenging business and they are very good at it,” said Mike McAfee, Executive Director of Visit Bloomington. “The positive impact these events have on the economy and quality of life in our community is significant and we are grateful to support the parks department on these efforts,” added McAfee.

National tournament games will be held at Twin Lakes Sports Park and Winslow Sports Complex, with the ballfields at Lower Cascades Park used for team practices. For more information about USA Softball national championships, or Bloomington Parks and Recreation, call 812-349-3700.