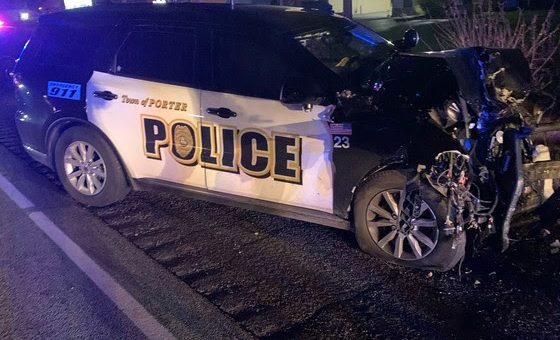 PORTER — An officer with the Porter Police Department was sent to the hospital Saturday night after a pursuit of a suspected kidnapper ended in a crash, Indiana State Police said Sunday.

ISP reported they received a call saying a woman was being held against her will by a person with a handgun. The incident happened at 7:00 p.m. The vehicle was located on Interstate 94 near Burns Harbor, 12 minutes later.

The driver of the vehicle initially pulled over, but then sped away. A pursuit was initiated and the vehicle exited I-94 at State Road 49.

According to ISP, the vehicle entered State Road 49 driving north in the southbound lanes then crashed head-on into a police car.

Two people fled from the scene, one of whom was tased and taken into custody. Police on Sunday identified that man as 25-year-old Aries Atlas, of Kalamazoo, Michigan. He was transported to the hospital with injuries that are not believed to be life-threatening.

The second suspect, 29-year-old Samuel Kuhl, also of Kalamazoo, Michigan, who fled the scene was arrested Sunday. He was also wanted on two separate warrants, according to ISP.

Police say a handgun found during the investigation was stolen from Kalamazoo.

Three people in the vehicle did not flee. One of them — a woman — was taken to the hospital with injuries that are not believed to be life-threatening. Their names have not been released by ISP.

Corporal Scott Cornelison, a 16-year veteran of the Porter Police Department, was injured during the collision and was transported to the hospital with serious injuries but they are not believed to be life-threatening.