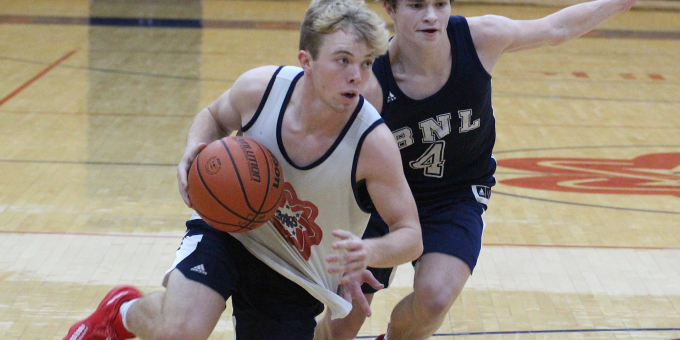 BEDFORD – Don’t call them short. The politically correct term is “vertically challenged.” And they’re not young. They’re “age deficient.” And those are just the first two obstacles Bedford North Lawrence must overcome as it prepares to open the 2021-22 campaign.

Undersized and inexperienced, with the leading scorer set to likely miss the first six games, the Stars face multiple challenges, starting with a tough season debut against their polar opposite. Bloomington North has size and veteran leadership, including a coveted Div. I recruit, that will present an extreme test on Tuesday night.

BNL, with only one senior on the roster, will have to grow in a hurry. Not upward, because that’s probably impossible at this point, but inwardly. The Stars will have to mature rapidly as they get thrown into the fires of high-level competition.

With junior guard Colten Leach still recovering from a second off-season knee surgery, BNL will have only one returning starter back from last year’s 14-11 squad. That means there are a lot of questions and unknown factors as Jeff Hein begins his third season as head coach. Ready or not, the Stars will be an ongoing chemistry experiment while they adjust lineups and personnel to find the best mixture for success.

“We have to grow, game to game,” Hein said. “Our goal is to get better. These kids will compete, play hard. With no experience back, we have kids that haven’t been through it yet. It’s a different level, and we’re going to learn on the fly.”

The Stars, heavy on guards and light in height, will have to fly at low altitude. While Leach (13.6 points per game while earning All-Hoosier Hills Conference honors a year ago) finishes his rehabilitation, the spotlight will shine first on junior guard Colton Staggs (6.1) and junior forward Kaedyn Bennett (1.7). They have previous varsity minutes. Everyone else is making a giant leap and will probably get a rude introduction to life on the next level.

“Our big thing is leadership,” Hein said. “We’re going to be a junior-led team. We need them to bring the younger kids along. These kids were freshmen and 8th graders last year. They have to teach them the tricks of the trade and the way things are done, at a higher intensity in ability.”

Who claims the other spots? That’s still debatable. Houston Corbin was in that mix but suffered a knee injury and will be out 8 weeks. Right now the leading candidates are junior Jett Jones (6-0), sophomore Trace Rynders (5-9) and junior Dylan Nikirk (5-10). And some of those listed heights might be exaggerated, as basketball players tend to do that. Some of the reserve roles could include sophomore Memphis Louden, freshman Vince Moutardier or freshman Logan Miracle. Even after a summer of work and two preseason scrimmages, Hein still isn’t sure.

“In time we have a chance to be pretty good,” Hein said. “Getting there after two or three games would be great, but it will probably be longer.”

With so many issues, BNL’s success will depend on mastering the basic fundamentals. Protect the basketball, defend like demons, rebound bigger than their size. Hein laughed when he said the Stars would rebound below the net while their opponents would rebound above the rim, but that’s not far from the truth. “It’s next man up, and our next man isn’t over 6 feet,” he said.

“That’s been my goal since I got to BNL, to have a team more fundamentally sound than the other team. But we’re so young and still learning. And we’re throwing them into the fire. Rebounding is a big issue because of height, we can’t be giving teams too many possessions.”

North. 13-5 a year ago, will feature 6-8 junior J.Q. Roberts, a 3-star recruit who averaged 11.6 points and 6.4 rebounds last season. He already has college offers from Indiana, Butler and Iowa. North’s floor leader is senior Nick Klaiber (14.6 points, 4.4 assists), who is bouncing back from a broken wrist this summer.

“The ceiling for J.Q. is really high,” North coach Jason Speer said. “He’s improved day by day with his ballhandling and shooting.”

”They will be a very good team,” Hein said. “Roberts will be a tough match for us, a really nice player who can score inside and outside. We will throw these kids into the fire right away. I like the fact we have a difficult schedule because we’ll learn a lot. We need to play good competition.”

“For us, it’s all about dictating the speed of the game,” Speer said. “We feel we can play fast. We feel that’s one of our strengths. But when you start playing, that’s when the evaluation really starts.”

North won last year’s clash, a 38-27 final that set offensive basketball back a few decades. BNL had a 13-7 lead and then went 11:45 without a field goal. The Stars also had a 25-21 advantage and went scoreless for 6:30. The Cougars, with Klaiber missing the contest, were equally inept, shooting 23.5 percent and hitting only 1 of 12 3-pointers. “That was really inexcusable,” Speer mumbled. Isaac Vencel led North’s late charge and totaled 15 points.