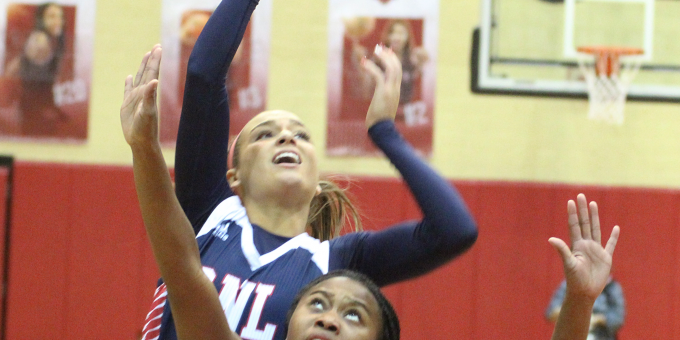 INDIANAPOLIS – Her lip was swollen and her nose was plugged to stop the blood. Karsyn Norman got beat up, then clinched her fist to land the biggest punches during a huge road victory. Call this triumph a true Norman conquest.

Battered and bruised, breathing out of only one nostril, Bedford North Lawrence’s whirlwind junior guard exploded for 15 second-half points, including 9 straight during a frantic fourth quarter, as the No.4 Stars rallied from a double-digit deficit to conquer No.3 North Central 54-51 on Friday night.

Norman totaled 18, plus a game-high 7 rebounds, while senior Carlee Kern contributed a career-high 12 points as BNL (5-0) won a road clash for the first time in series history. And they did it the hard way, collapsing late in the first half, falling behind by 13 early in the third quarter, and digging deep for an impressive win, an early-season triumph with a late-February feel.

The final 30 seconds were a story all their own. The Stars trailed 51-48 in the final minute when Norman dashed through traffic for a bucket from the paint. North Central’s Trinity Archer missed the front end of a 1-and-1 at the line, but teammate Nakiya Harris waded into the fray for a rebound. Her pass out of trouble was intercepted by Norman, who raced to a go-ahead layup with 17 seconds left.

The Panthers (4-1) set up Destinee Hooks for their response, but her pressured jumper from the lane was off target. BNL’s Madisyn Bailey grabbed that rebound and unloaded the ball to Emma Crane, who was fouled with 3.7 seconds left. The junior reserve made both clutch free throws, and Hooks clanged a halfcourt heave at the buzzer, setting off a deserved BNL celebration.

The battle between the Class 4A powers equaled the hype and the expectations. North Central was on the verge of pulling away, with a Hooks 3-pointer creating a 40-27 advantage. Mallory Pride’s 3-pointer and Kern’s 3-point play changed momentum, and then Norman took over with 15 of the next 18 BNL points. That stretch was something special, especially considering the physical pounding she had absorbed.

“I got a busted lip, and it was like ‘Ok it’s getting real,’” Norman said. “I got busted in the nose, it was like ‘I got to pick it up.’ I got to sit down for a few seconds, got to collect myself.”

Kern’s rebound-and-1 ignited 8 straight points, the last four by Norman, as the Stars scrambled within 44-38. Her 18-footer in transition, Bailey’s wing bomb and Norman’s deep launch got BNL within 49-46, setting the stage for tense closing moments.

“People like to make it complex, but it’s really a simple game,” BNL coach Jeff Allen said. “When you have athletes that can go make plays, especially against a team that plays pressure defense like North Central does, that’s what it takes. We had kids do that in the second half and clawed our way back into it.”

North Central took control with an eruption late in the fist half. From a 24-23 lead, the Panthers turned BNL’s late flurry of turnovers into a 33-23 advantage at the break. The Stars were guilty of 14 turnovers in the first half, 9 in the second quarter, and had the glazed-eyes look of the condemned.

“I kind of challenged my kids at halftime,” Allen said. “We had never been hit in the mouth like that, like we were the last 90 seconds, They kind of stopped playing. I didn’t care what the score was, I cared that we compete. They promised me they would compete inn the second half, and they sure kept their promise.“

“The first half was really rough,” Norman said. “A lot of turnovers were my fault. Coach was yelling at us, ’If we didn’t want to be here, go home.’ Everybody wanted to be here, everybody picked it up. We got some adrenaline and just took off.

“I knew we were down at half by a lot, but I honestly never looked at the scoreboard. The momentum kept building, and it kept going.”

Norman was not the lone hero. Kern made two treys and added 5 rebounds before fouling out. Her previous high offensive output had been 9 points last season against Jeffersonville, and she had scored only 14 points all season before coming through with a huge performance.

“She’s so solid for us, really a calming factor,” Allen said. “She really keeps us calm in the offensive situations.”

Tanyuel Welch, a recent addition to the 1,000-point career scoring club and an Indiana All-Star candidate, paced North Central with 15 points while Hooks totaled 13. Her last shot from the paint, over two defenders, made everyone hold their breath.

“We had people in front, a hand up on the shot, and we got a great rebound,” Allen said. “And Emma came through and made some free throws.”

BNL finished with 18 turnovers, almost all of them in the halfcourt setting. North Central’s team quickness and passing-lane tenacity made execution difficult. Norman just made six tough field goals during the final 10 minutes.

“They’re an outstanding defensive team,” Allen said. “They force you to make bad decisions. That scared me more than the full-court pressure. Sometimes we just have to make a play.

“We just feel blessed to come back and play the way we did. I’m proud of my girls for fighting back.”