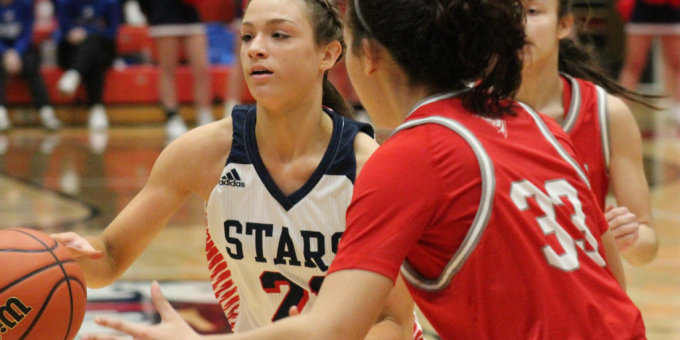 BEDFORD – Nobody wears the bull’s-eye better than Bedford North Lawrence.

In the Hoosier Hills Conference, especially among the five league foes lumped in the same Class 4A sectional as the Stars, BNL is marked. With 20 HHC titles in program history, with 10 consecutive sectional titles won at the expense of familiar opponents, the target is part of the uniform.

BNL will start the chase for another league championship on Saturday night, hosting Jeffersonville in the conference opener. The Red Devils have been as hot as their nickname, winning their first five games (prior to a road clash with 3A defending state champion and current No.3 Silver Creek on Friday). They will give the No.4 Stars (4-0 heading into the road battle with 4A No.3 North Central) a fiery test.

“It’s always a goal to win the Hoosier Hills Conference, so we need to get off on the right foot,” BNL coach Jeff Allen said. “We’re here at home, we feel like we need that first conference win. I think the kids are ready to go. I always like this week (with three games), because it’s like a sectional, playing against quality opponents. So it’s a great measuring stick.”

BNL swept two games from the Devils last season, winning the regular-season clash 84-37 while hitting a school-record 18 3-pointers. In the rematch, the Devils displayed significant improvement, but BNL went on a 15-0 run in the third quarter and pulled away to a 62-36 victory in the sectional semifinal.

The Stars are accustomed to being the big-game quarry. They expect another high-intensity collision with one of their fierce rivals.

“It’s definitely a rival game,” BNL junior guard Karsyn Norman said. “We have to come out and do what we do.”

“We’ll have to match intensity,” Allen said. “You can’t stand back. I love being that person that is targeted, but you have to be able to initiate aggression because you will receive that. You better be able to bring it back to them.”

The Devils will have to worry about BNL’s scintillating duo of Norman and sophomore Chloe Spreen. Both were key figures in the two wins over Jeff last season. Spreen had 34 points in the two games while Norman totaled 37. Jeff also struggled with BNL’s defensive pressure, totaling 53 turnovers in the losses.

“Playing at BNL is never easy and the combination of Spreen and Norman is a tough one to defend,” Jeff coach Missy Voyles said. “This weekend, with back-to-back road games at Silver Creek then BNL, should be a good test for us and show us what things we need to work on going forward.”

While BNL views the league title as a perennial prize, the Stars are not the defending champions. That honor is Columbus East’s. Winning it back is a prime goal.

Last meeting: BNL swept two games from the Red Devils last season, winning the regular-season clash 84-37 while hitting a school-record 18 3-pointers, then posting a 62-36 win in the sectional semifinal.