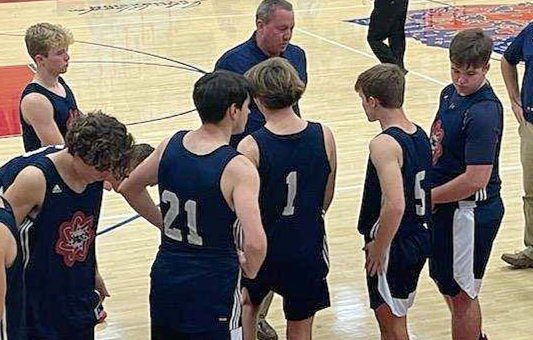 MARTINSVILLE – Bedford North Lawrence capped its preseason preparation with a 41-30 win over Martinsville during three quarters of the IHSAA-sanctioned scrimmage on Friday night.

Kaedyn Bennett paced the Stars with 11 points while Jett Jones totaled 9. BNL won the first quarter 16-11, battled to a 9-9 deadlock in the second, and posted a 16-10 advantage in the final quarter.

“We learned some things about ourselves again tonight,” BNL coach Jeff Hein said. “I thought our defense was solid for the most part. We need to work on our rebounding. It was good to play against someone else besides ourselves tonight. I liked how we shared the ball and the scoring balance showed that.”

Bennett hit two 3-pointers during the first quarter and finished with three from long range. The Stars hit 6 treys total. Jones and Trace Rynders had 5 points each in the final quarter.

Isaiah Marlett hit three treys in the first quarter for the Artesians and finished with 15 points.

“We just have to keep working hard and finding ways to elevate some of the deficiencies we have,” Hein said. “We will just keep chipping away and trying to improve each and every day in practice, and put a product on the floor we can all be proud of.

“I’m proud of the effort tonight and thus far. The dress rehearsal is over and we get to play for real Tuesday night.”

BNL will open the regular season at Bloomington North on Tuesday.