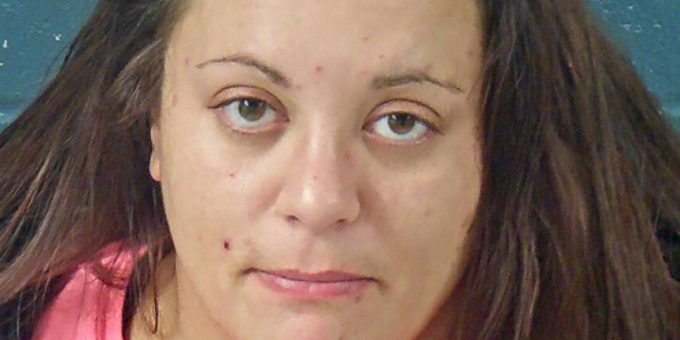 BEDFORD – On Wednesday, November 17th, Sergeant Greg Day of the Indiana State Police Bloomington District A.C.E.S. (Aggressive Criminal Enforcement Section) was conducting a patrol in the area of State Road 37 and US 50 West in Lawrence County when he observed a white, 2005 Nissan turn from SR 37 onto Swifty Lane and travel eastbound.

As the Nissan drove in front of Sgt. Day, he recognized the male driver as someone who had a suspended driver’s license. He also recognized the female passenger, 33-year-old Crystal Schofield, of Bedford, as someone that the Indiana State Police were investigating for allegedly being involved in dealing large amounts of methamphetamine in Lawrence County.

Sgt. Day conducted a traffic stop and spoke to the two occupants when he observed indicators of criminal activity including extreme nervousness and furtive movements as if Schofield was trying to hide something. He then requested a police canine to assist with the traffic stop. Bedford Police Officer Faheem Bade arrived and deployed his canine, Zazu, who gave a positive alert on the passenger side of the Nissan.

A subsequent search revealed a bag inside the glove box that contained a small amount of suspected meth, marijuana, meth pipes with residue, a pill identified as Hydrocodone, digital scales, and several small plastic baggies.

While placing Schofield into custody, she let Sgt. Day know that she had meth hidden under her clothing. She removed approximately 19 grams of meth.

Based on the items located as well as information obtained during interviews, probable cause was established that Schofield was dealing the meth.

Sgt. Day arrested Schofield and transported her to the Lawrence County Jail on the following charges:

Sgt. Day thanked Bedford Officer Bade and Zazu for their assistance once again.

“I greatly appreciate the working relationship that the ISP A.C.E.S. and DES have established with the Bedford Police Department. Officer Bade and many others are always right there to assist with our investigations, many of which are joint efforts,: said Sgt, Day. “This cooperation greatly increases the effectiveness of law enforcement in our communities. Thank you, Officer Bade and canine Zazu.”