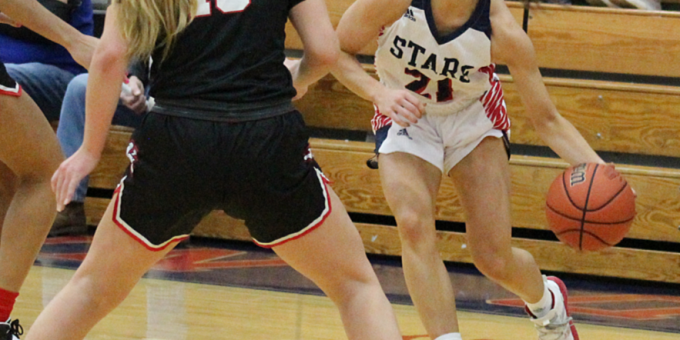 BEDFORD – Polls are the worst way to judge a team’s strength. Opinions are like noses – everyone has one, and they all smell. Worth is proven on the court, in head-to-head competition, and Bedford North Lawrence will soon discover just how good it truly is against one of the state powers.

The Stars, 4-0 and ranked No.4 in Class 4A, will clash with another possible title contender when they make the perilous trip to No.3 North Central on Friday night. It’s the first of several heavyweight battles on the BNL schedule, and it will provide an early-season litmus test. Are the Stars acid or alkaline? Red for real, or blue for base?

BNL’s true pH level is still undetermined. Three straight blowout wins, with the mercy-rule activated in the fourth quarter, haven’t revealed the ultimate truth, perhaps even established a false sense of security. That will be stripped away.

“I think we need this type of a game,” BNL coach Jeff Allen said. “I don’t know that we know how good we are right now. I feel good about how we’ve played, but we need to be tested by a team of this caliber, so we can see what our weaknesses are. We think we know what they are, but they will expose them.

“The kids are excited, and so am I. This is the reason you play basketball, to play these type of games, to go on the road against a quality opponent. Let’s go see how good we are. We’re looking forward to the challenge.”

The Panthers have been a nemesis, winning 5 of the 7 previous meetings, and BNL has never won on the road in the series. Few opponents can brag about that. There’s a reason for that: North Central is usually talented and terrific. And this season is no exception. Senior guard Tanyuel Welch, an Indiana Junior All-Star and Div. I recruiting prospect, leads the way after scoring 22 against Westfield and 26 against Jay County.

North Central prepped for this encounter with a 61-43 victory over city rival Lawrence North (the state champion in 2020) on Wednesday night. Welch had 23 in that triumph.

In addition to Welch, the Panthers will feature senior Desiree Hooks (13 against LN), shooting guard Ava Couch and perimeter threat Trinity Archey. North Central has quickness at every position.

“We match up well. It’s two athletic teams,” Allen said. “They still have a size factor, but Ella (Turner) and Emma (Crane) have done a good job and I will call on them to negate some size if they try to post us up.

“We’ve haven’t seen that level of talent yet. How do we react to it on the road? We’ve notoriously gotten in foul trouble up there, so if we can keep that from happening and not turn the ball over in the halfcourt, I think we’ll put ourselves in position to have a chance to win.”

“If we can knock them off, knock off another top team, it will prove we’re in the right spot,” Norman said. “It’ll be a crazy atmosphere. Their student section is always hard on us. It’ll be fun, a hard-fought game.”

Last meeting: Last season at BNL, Irye Gomez scored 17 points while powering the Stars to a 65-57 victory. Chloe McKnight and Karsyn Norman added 15 points each for BNL. Tanyuel Welch had 15 points and Meg Newman totaled 14 for the Panthers.