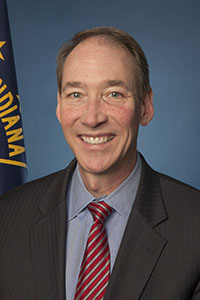 INDIANA – Bruno Pigott notified Gov. Eric J. Holcomb that he will be stepping down from his role as commissioner of the Indiana Department of Environmental Management (IDEM) for a new position as the deputy assistant administrator in the office of water for the U.S. Environmental Protection Agency (EPA).

“Bruno Pigott’s lifelong passion is to make Indiana and our country a better place to live,” Gov. Holcomb said. “For more than 20 years, there’s been no one more dedicated to balancing environment and business than Commissioner Pigott. With his guidance, the agency has streamlined processes, eliminated backlogs, and cleaned up contaminated properties.”

Pigott was appointed IDEM commissioner by Gov. Holcomb in 2017. Prior to serving as commissioner, he was the chief of staff and was the assistant commissioner in the Office of Water Quality for 10 years.

Under Pigott’s leadership the agency has:

“I’m grateful that I was able to serve under a governor who has a strong commitment to protecting human health and the environment,” said Commissioner Bruno Pigott. “I was honored to work alongside my IDEM colleagues who have dedicated their livelihoods to protect our environment and because of them and the support of Gov. Holcomb, IDEM was able to make significant improvements”