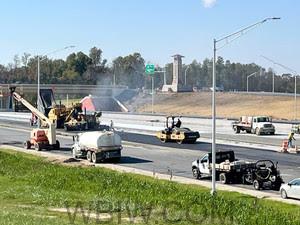 MARTINSVILLE – State Road 37 is on track to reopen to traffic in Martinsville by end of this year.

In the coming weeks, S.R. 37 northbound is expected to shift across the median onto new pavement and bridges from Henderson Ford Road to S.R. 144.

The right lane of S.R. 37 northbound is expected to close today from Indian Creek to S.R. 39. Crews are completing guardrail and cable barrier installation in what will become the center median of I-69.

Watch for changing traffic patterns at Ohio Street near S.R. 37 late this week or early next week. Traffic is expected to shift slightly into its final lane configuration.

Bluffdale Road is expected to close permanently to through traffic this week at S.R. 37 near Angel Animal Hospital and McCarty Mulch & Stone. The intersection will be right in and right out only as frontage road construction continues. Traffic that would normally cross S.R. 37 or turn left can access Bluffdale Drive or Bluff Road from the north at Fairview Road.

Temporary paving has begun along the south side of S.R. 144 near S.R. 37. Crews are preparing for I-69 interchange construction once traffic is no longer using S.R. 144 as a detour.

Large cranes safely completed concrete beam installation last week for Keystone Avenue over I-465 and the future I-69 southbound lanes over Wicker Road.

Weekly street sweeping and debris cleanup has been scheduled each Thursday afternoon from 3 to 11 p.m. Drivers should watch for trucks closing the shoulders along S.R. 37 and the I-465 southwest leg between I-65 and I-70.