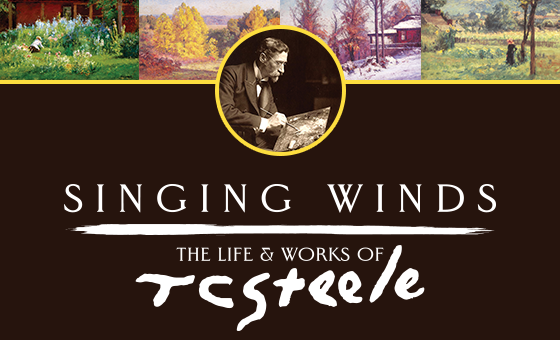 BLOOMINGTON – A new documentary from WTIU Public Television explores one of the most celebrated American Impressionists from Indiana. Singing Winds: The Life and Works of T.C. Steele will premiere on Sunday, November 28 at 8 p.m. on WTIU and simultaneously streams on Facebook Live.

The program looks at the Hoosier artist’s life—from his hardscrabble youth to his journey through some of the major art centers of Europe, to his return to his native Indiana, where he captured the subtle beauty of the Midwestern landscapes.

Born on a farm in Gosport, Indiana, T.C. Steele’s father died when he was a young teen, which during the Civil War era would have meant for most a life of hard labor on the farm helping to support their families. The documentary reveals that Steele’s journey was an unusual one—from early art and music classes that his mother insisted he take to a
surprising opportunity to travel to some of the world’s top art schools in Europe.

The program follows Steele’s eventual return to Indiana and the start of his remarkable career in portrait painting, and his rise as one of the nation’s premier landscape painters at a time when the genre was only just beginning to take root across the United States. The program shows that at the pinnacle of his career, Steele was celebrated as one of the leading plein air artists in America.

Watch a trailer and learn more about Singing Winds: The Life and Works of T.C. Steele at wtiu.org/tcsteele. Following the premiere on WTIU and Facebook Live, the program will be available to watch on this website starting November 29.

Singing Winds: The Life and Works of T.C. Steele is made possible with support from Indiana Public Broadcasting Stations and the WFIU/WTIU Documentary Programs Fund.