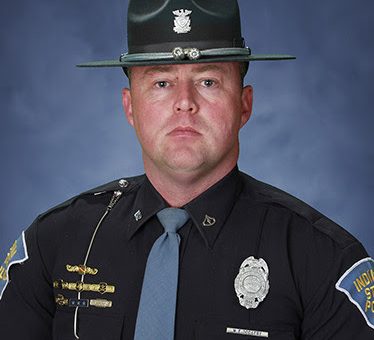 INDIANAPOLIS –   The Indiana State Police held awards and recognition ceremony in Indianapolis this past Friday, November 12, 2021.  The ceremony publicly recognized the achievements and accomplishments that all too often go without proper recognition.  Officers were recognized for their dedication, service, bravery, devotion to the department and the citizens of Indiana.  Master Trooper Mick Dockery from the Indiana State Police Bremen Post was recognized for several awards.

Master Trooper Dockery received a Gold Star Award for Distinguished Service for his actions on September 12, 2020.  While on a traffic stop in South Bend, Dockery was alerted by a passing motorist that a house was on fire nearby.  When Dockery arrived at the scene, he saw that the garage and east side of the house was fully engulfed in flames.  Dockery approached the front door and could see a male standing in the front room.  He told the male to come out, but the male was unable to open the front door.  Dockery forced the storm door open and the male disappeared deeper into the burning home saying he was looking for his pet.  Dockery then observed a disoriented female and pulled her from the burning home to safety in the front yard.  Dockery then went back into the house and was able to safely escort the male from the burning home.

Master Trooper Dockery also was recognized as the 2020 Trooper of the District for the Bremen Post. This award is given annually to a trooper at each district that personifies integrity, professionalism, and a well-rounded work ethic.  Dockery was selected by his command staff for his dedication, traffic and criminal enforcement, community involvement, and other services performed for the department beyond normal expectations.  In 2020, Dockery made 818 criminal arrests, 110 of which were for felonies.

Dockery also excels in making Indiana’s roads safer through his DUI enforcement.  These actions resulted in 203 DUI arrests during 2020.  Dockery also received the District DUI Award as well as a DUI Life Award for being the #1 DUI enforcer within the Indiana State Police for 2020.

Dockery also received a Combat Action Award for actions taken during a barricaded subject call in St. Joseph County in September 2008.  During this incident Dockery had several rounds fired at him and other officers from a man barricaded inside a home before the man was eventually taken into custody.

Dockery’s actions in 2020 ultimately resulted in him being named the Indiana State Police 2020 Trooper of the Year.  This award is presented yearly to the top trooper in Indiana “who inspires others to serve in a manner that significantly exceeds expectations.  The Trooper of the Year has exemplified the strength of character, a strong work ethic, and an unsurpassed level of integrity that is the embodiment of being an Indiana State Trooper.”

Dockery has served with the Indiana State Police for nearly 22 years.  He patrols the Bremen District primarily in Elkhart County.