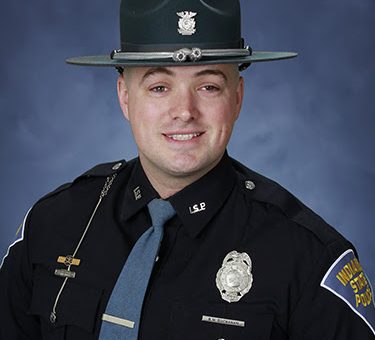 EVANSVILLE – Through his hard work and dedication to public service, Trooper Brock Buchanan has been selected as the “2020 Trooper of the District” for the Evansville District.

Buchanan received his award Friday at the Indiana State Police Awards Ceremony held at the Indiana Government Center in Indianapolis. This award is presented to the Trooper at each of the 14 districts throughout the state who has achieved outstanding efforts in traffic and criminal enforcement, case and crash investigation, public information programs and community service. This year’s award ceremony was postponed several times due to COVID restrictions.

Trooper Buchanan is a six-year veteran of the Indiana State Police and has spent his entire career at the Evansville Post and primarily patrolling Knox County.

“Although 2020 was quite the anomaly due to the COVID-19 pandemic, Trooper Buchanan still made a strong impact in his patrol area where he normally works the late-night shift. Although a lot of our proactive traffic initiatives were stifled due to COVID, Trooper Buchanan still arrested 16 impaired drivers and 36 criminal defendants for a variety of criminal charges,” said Lieutenant Brian Bailey, Commander of the Evansville District.

On August 14, 2020, Trooper Buchanan and a Vincennes firefighter responded to a capsized boat on the Wabash River. They launched a rescue boat and were able to rescue four adults and three children. “Their rapid response and actions undoubtedly prevented serious injury or death to those involved,” said Bailey. Trooper Buchanan also investigated a burglary that took his investigation into several different counties over multiple days. Trooper Buchanan’s investigation recovered a good majority of the stolen property, and he was able to clear the case by making an arrest.

Trooper Buchanan resides in Knox County with his wife and two daughters, ages five and nine.