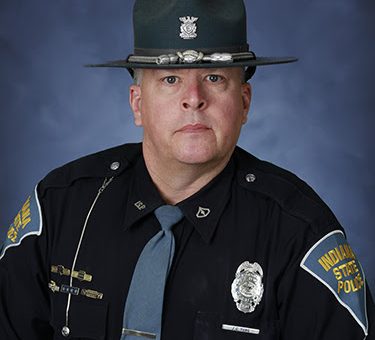 BLOOMINGTON – The Indiana State Police held their annual awards ceremony yesterday to recognize troopers and state police civilian employees throughout the state for various accomplishments and awards after being postponed several times due to COVID restrictions. ISP employees were recognized for their service, bravery, and devotion to the department and the citizens of Indiana.

Through his hard work and dedication to public service, Master Trooper John Yung has been selected as the “2020 Trooper of the District” by the Command Staff from the Bloomington Post. The factors used to determine the “Trooper of the Year” included, but were not limited to, traffic and criminal enforcement, community involvement, and special assignments such as SCUBA, ERT, Meth Lab Team, Instructor ratings, or other services performed for the department that goes beyond normal expectations.

Master Trooper Yung was awarded a plaque that read, “Presented to the Trooper who has achieved outstanding enforcement efforts in the areas of traffic and criminal enforcement, case and crash investigations, public information programs, and community service, and who has exemplified the professionalism and integrity expected of an Indiana State Trooper.”

Yung graduated from the 53rd ISP Recruit School in December of 1995, grew up in Greene County, and graduated from Linton-Stockton High School in 1980. Yung then served with the Greene County Sheriff’s Department for eight years before graduating from Vincennes University in 1993 with an Associate’s Degree in Law Enforcement.

Upon his graduation from the Indiana State Police Academy, Yung was assigned to the Versailles Post where he served as a road trooper, primarily patrolling Dearborn and Ohio Counties until 1997. M/Trp. Yung then transferred to the Bloomington Post where he primarily patrols Greene County. Yung previously was named Trooper of the District in March of 2017.

During his career, Yung has served as a crash reconstructionist, a member of the district Tactical Intervention Platoon (Mobile Field Force – Crowd Control) since 1998, and has also served as a member of the Critical Incident Stress Management Team for the past 25years.

Bloomington District Commander, Lieutenant Paul Bucher stated “Master Trooper Yung has always been one of the hardest working police officers I’ve ever had the pleasure of working with; he is a valuable asset not only to the citizens of the State of Indiana but to the other law enforcement officers he serves with daily. His work ethic and professionalism do not go unnoticed and we are lucky to have him serving in the Bloomington District”.

Yung and his family reside in Greene County.