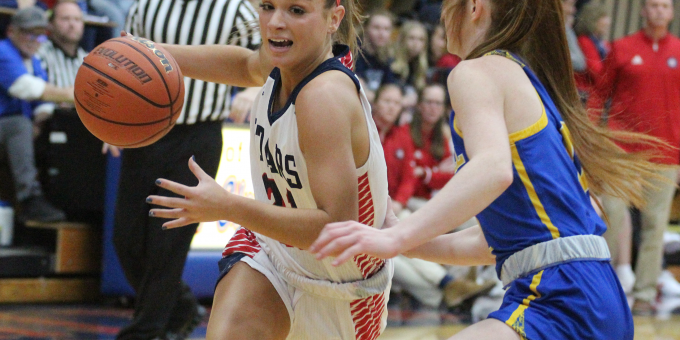 BEDFORD – Coaches are always tinkering, tweaking, tuning to correct mistakes and weaknesses. They are the ultimate troubleshooters, scouring tape for the answers to the question: How can my team get better? Every problem has a solution, if the available talent allows it.

Bedford North Lawrence, on the brink of a brutal, difficult schedule stretch, is running out of tinker time. The No.4 Stars will soon be tested by the best. That’s why the highlights of a 41-point victory are not considered as important as the talking points generated during some scuffling moments. There were not very many, of course, but those will be examined.

For the record, the Stars were sensational during the final 28 minutes of Saturday night’s 68-27 victory over Mitchell. Chloe Spreen unveiled another dimension to her extraordinary game with four 3-pointers and a career-high 30 points. BNL’s halfcourt defense was sticky and tenacious while the Bluejackets found few escape routes to the rim.

The first four minutes will be talked about more during film study and locker room meetings. The Stars missed five consecutive shots and were mired in a 3-3 deadlock before Karsyn Norman unleashed her personal firestorm of 10 straight points. After that, everyone else relaxed and the rest was emphatic domination.

BNL continues to grow, to evolve as this new lineup, with only two returning starters from a year ago, works on continuity and cohesion. It’s easy to forget that two of them are playing their first significant varsity minutes. Allen has not. These first three wins have been valuable learning experiences. This lesson? Execute with a purpose. Each possession could be a difference maker when the competition jumps a few levels.

“When we’re playing later in the season, and it’s more important as we get close to the playoffs, we can’t have possessions where we have multiple empty trips,” Allen said. “Our defense has been outstanding, but we can’t have four or five stops in a row and come up empty. Against good teams, you have to deliver on the offensive end.”

BNL definitely delivered, with Spreen’s 30-point eruption overshadowing a complete team win. Norman, Mallory Pride and Madisyn Bailey were all scoring threats, Norman and Bailey combined for 12 assists. Some of those were gorgeous, like the Norman dish to Pride for a third-quarter basket. The play was called for Norman to break free off a double screen for a wing trey, but she slashed, dashed and dished. Allen took note.

“When you have talented kids that are willing to play for each other and share the basketball, it makes you very dangerous,” he said. “That’s what we preach all the time. The kids are talented. When they share the ball like that and set your teammate up, it makes you tough to defend.”

BNL’s next challenge on Tuesday night will be unusual. How often has Bloomington South been labeled a trap game? The Panthers are struggling at 0-4, and many are already looking ahead to BNL’s road trip to No.3 North Central on Friday, followed by the Hoosier Hills Conference opener with Jeffersonville. The Stars can’t allow that to happen.

“We know South is struggling,” Allen said. “We want to play at our level. We’re not going to overlook South, because we feel Iike we still have a lot to work on. So it’s another game to get better.”

The Panthers are averaging only 28.8 points per game, and their woes can be traced to turnovers. They had 30 errors during a 61-29 loss to Pike, 30 in a 45-32 setback to Edgewood, 23 in a 66-25 defeat to Columbus East. The Olympians forced 13 turnovers in the first quarter while opening with a 15-0 run, then blew out to a huge lead with the first 17 points of the second quarter. South also fell to Jeffersonville 50-29 on Saturday.

Turnovers were the key stat during BNL’s 66-45 victory at South last season. The Stars forced 24 miscues, while Spreen had a big performance with 18 points and 9 rebounds. BNL will look to turn up the defensive heat once again. Ball pressure and that 1-2-2 trap will be emphasized.

“We’re going to have to pressure in the halfcourt more,” Allen said. “The kids have really excelled, taking what the staff has told them and applying it to the game.”

Last meeting: Last season at South, Chloe Spreen had 18 points and 9 rebounds as the Stars prevailed 66-45. Irye Gomez had 14 points and Chloe McKnight totaled 13. Brooke Grinstead had 11 points for the Panthers, who were guilty of 24 turnovers.

Game notes: BNL has won 10 straight games in the series. South’s four-game losing steak is its longest since the 2015-16 season.