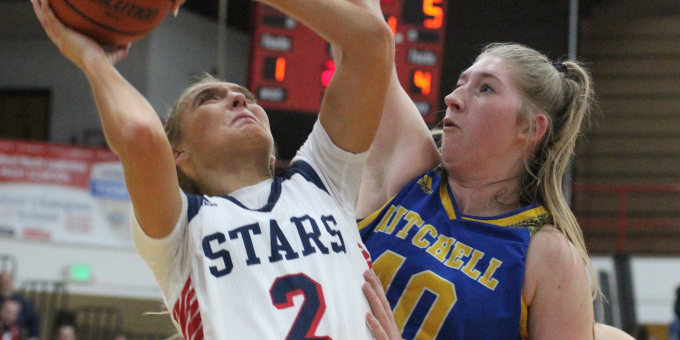 BEDFORD – All is fair in love, war and basketball. Who said life is fair? They lied. Who said Chloe Spreen couldn’t shoot from the perimeter? False, fiction, fabricated rumors.

Spreen, Bedford North Lawrence’s breathtaking sophomore star, made a liar of the scouting report. Tired of getting swarmed and smacked in the paint, she cruised to the 3-point line, discovered her confidence in the stroke, and showed Mitchell – and the watching world of scouts and college coaches – the truth.

After a sluggish start, after missing her first two from long range, Spreen exploded in the second half as the No.4 Stars shot down Mitchell 68-27 on Saturday night. Spreen scored a career-high 30 points and super-charged point guard Karsyn Norman added 11 as BNL (3-0) conquered its county rival for the 12th consecutive time in the series.

For all her gifted talents, for all her amazing ability to score from the interior, it’s more than a little unfair for Spreen to be so dangerous from the 3-point line. Who would expect it? She only hit 12 treys during her freshman season, she had hit only one during the first two games this year. Then she drilled four in row, and the Bluejackets had to be stunned. If this starts a trend, look out.

Her bombs, the result of tireless work with assistant coach Chase Spreen and the spark of confidence from the positive feedback when one finally dropped, were devastating as the Stars ripped to an insurmountable lead in the second half and triggered the running clock (the new mercy rule when a gap of 35 points is reached) with 6:28 left. She hit her last 7 shots total. Life is not fair, why should she be?

“I just worked super-hard on my shot, focused on it for a long time. It just felt good,” Spreen said. “It’s just a mindset of, I know I can make them. You can’t stop shooting. I finally got one to fall. Teams know what I can do in the paint, so I will need confidence out there.”

This game tape will be paused and replayed a lot by future opponents. What now? Which poison will be chosen?

“It’s another layer of ‘Ok, now how do we defend her?’” BNL coach Jeff Allen said, smiling when he said that. “She’s battling inside, but I pulled her over and told her she needs to shoot the perimeter shot, too. There will be times to open the game up and be able to shoot the ball. And you saw a glimpse of her being able to shoot the ball. She just has to have confidence to pull the trigger like that all the time.”

Boom, from the key. Swish, from a little deeper. Every shot she takes, every move she makes, they’ll be watching her. Mitchell coach Tim Haworth could only shake his head and give a respectful salute.

“I didn’t see her really look to shoot a 3 on tape,” Haworth said. “But if we focus in on just her alone, there are so many complementary players. And they do such a good job of finding the open cutter. We could put two or three around her. But the way they pass the ball, it would be a layup. So we played straight up, see what happens. She did what good players do. If we are going to lay off her four feet, she will take that.”

Spreen wasn’t working alone. Norman got BNL through early dysfunction with all her points in the first quarter, and she ignited a 12-0 burst to close that period. She splashed her own trey, streaked in transition to a layup, converted a steal into a gorgeous spin move for a left-handed bucket. Ella Turner’s 15-footer and Spreen’s breakaway capped the run to an 18-5 lead.

Haworth could already sense the beginning of the end. His club, hampered by injuries and constricted to a six-player rotation, was coming off a successful road trip to Perry Central just 24 hours earlier. But this was a beast of a different nature. Mitchell (1-2) had 13 turnovers in the first quarter. That’s no excuse, just a fact.

“Fatigue sets in. You could tell,” Haworth said. “Then you start standing and watching. About three minutes into the second quarter, I said ‘Uh, oh.’ You could see it coming.

“Quickness is a killer. The quickness just overwhelmed us, and I won’t be the only one saying that this year. They have a great team, the kids are tenacious. You can’t duplicate what they bring. We don’t have that type of speed, we won’t see that the rest of the year.”

BNL found all the holes. Mallory Pride scored twice off beautiful passes from Norman and Carlee Kern, Kern dropped a floating 10-footer in the lane, Madisyn Bailey dashed to a 3-point play as the lead swelled to 29-14. Kern added another back-cut layup as BNL got to halftime with a 35-17 edge.

And then came the Spreen Express. She had 15 points in the third, with the Stars cruising to a 57-23 lead. Emma Crane’s layup made it 61-25 and punched the button to start the running clock.

In addition to her early points, Norman had 6 assists and earned praise from her coach. “She’s been spectacular so far this year,” Allen said. “She’s really looked to attack, really pushes the pace. I’ve been really happy with her play. Her potential is unlimited in what she can do. She’s been a catalyst for us.”

Taylor Duncan paced Mitchell with 10 points while Jordyn Sarver added 8. The Bluejackets finished with 24 turnovers and hit only 9 of 34 shots.

“Our defense is outstanding right now,” Allen said. “We’re doing a really good job in the halfcourt. That’s one thing we’ll have to do this year.”

Mitchell, in the midst of 5 games in 8 days, will host Loogootee on Tuesday. The Stars will be in action that same night, welcoming struggling Bloomington South to BNL Fieldhouse to begin a busy week.