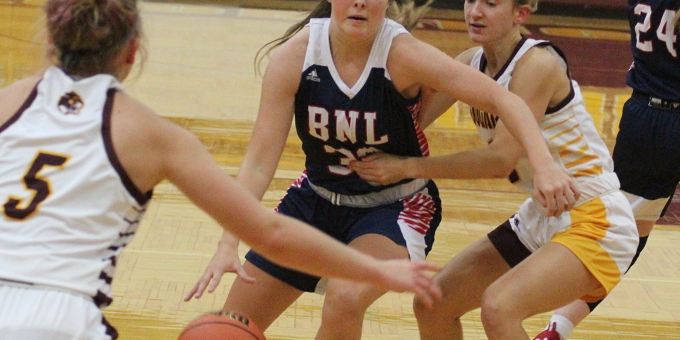 BEDFORD – Rivalries are the pulse of the game, the heartbeat of competition. It’s a greater level of adversaries – based on something as profound as mutual respect, as simple as proximity or as primordial as scorn – that brings out the best, that inspires an exceptional performance. No victory is sweeter.

Bedford North Lawrence and Mitchell, after a year’s absence because of uncontrollable factors, will restart their county feud on Saturday night. It’s a shame the annual clash was cancelled and lost while battling virus issues, so this renewal will be a celebration of normalcy and a rekindling of the basketball link between two communities.

Rivalries aren’t always measured by competitive equality. BNL has won 11 straight games in the series by an average of 42.5 points, but that’s not the point. The familiarity between the programs, the closeness of the communities, the bragging rights between friends and families, make it special.

No.4 BNL (2-0) will wear the favorite’s status, the Bluejackets (0-1 heading into a road trip to Perry Central on Friday) will take the underdog’s role, drawing clear battle lines when the foes meet in BNL Fieldhouse. But those lines get blurred when inspiration sparks the longshot to take their best shot. The Stars expect nothing less.

“There’s a lot of pride involved, a lot of tradition that goes back,” BNL coach Jeff Allen said. “That has existed a long time, and it’s great for the communities. That’s the heart of Indiana basketball. That’s the thrill of playing the game, competing and knowing you’re going against somebody that will give you their best. That’s a big part of what brings enjoyment to the game.”

The Stars are off to a solid start after two road wins, eager to make their home debut and keep their momentum. Junior guard Karsyn Norman (19.0 points) has been an electric dynamo, totaling 6.0 rebounds, 4.5 assists and 4 steals. Sophomore star Chloe Spreen (17.5 points) is coming off a career-high 22 points at Bloomington North. Sophomore guard Madisyn Bailey has contributed 9.0 points and 4.5 boards, and the role players have been extremely productive.

“We understand what we’re up against,” Mitchell coach Tim Haworth said. “We’re facing two D-I players, and that will be tough for us. But our kids like the competition.

“Past records don’t matter. We’re playing BNL, and that’s all that matters. With our kids, even though we play at Perry Central on Friday, it’s in the back of their minds. We’re playing one of the best programs in the state, their history speaks for itself.”

The Bluejackets, who will be playing their third straight road game, opened with a 49-42 loss at Lanesville. Maddie Robertson, a 6-2 senior, had 13 points and senior guard Taylor Duncan totaled 11. Mitchell had several positive stats in that clash, notably a 42-30 rebounding edge and 14 second-chance points. Even with turnover issues that allowed the Eagles to score 16 points off those misuse, even with four players with four fouls entering the fourth quarter, Mitchell had a possession to pull even in the final 90 seconds.

Mitchell will have a size and experience edge, with 5-10 junior Brooklyn Peterson, with veteran guard Jordyn Sarver. The Bluejackets will have to lean on that as they face a tough opening schedule. Four of their first five opponents were sectional champions a year ago.

“We have to have the realization that we’re getting into shape and timing,” Haworth said. “We have a lot of high expectations.”

”They’re bigger than us, which is a factor we’ll face a lot this year,” Allen said. “And we always add in the factor people play inspired against us. We understand that and talk about that a lot. We have to meet that intensity and play with that same type of inspiration. So our kids will be ready to play at a high level.”

BNL won the last meeting 66-22 in 2019. Mitchell did played inspired early, but BNL’s 30-1 run from the late first quarter to midway through the third ended the suspense. Norman had 15 points and Chloe McKnight added 12 for the Stars that night.

Last meeting: BNL prevailed 66-22 during the 2019-20 season. Karsyn Norman scored 15 points and Chloe McKnight added 12. The Stars went on a 30-1 run during the middle quarters. Maddie Robertson and Jordyn Sarver had 6 points each for Mitchell.

Previous game story: How Sweet it is for Stars