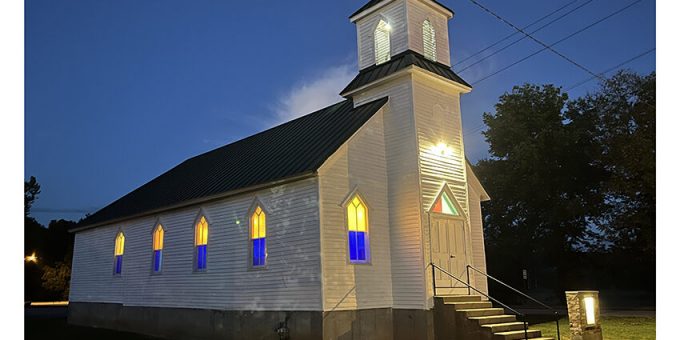 WEST BADEN – When the First Baptist (Colored) Church in West Baden Springs landed on Indiana Landmarks’ 10 Most Endangered list in 2014, the building looked forgotten. Now, a century after its construction, the wood-frame Gothic Revival chapel is poised to welcome a new generation, thanks to a renewal project led by volunteers who believed the building’s heritage made it too important to lose.

Built in 1920 at the corner of Sinclair and Elm streets, the church is one of the last remnants of a once-robust African American community that settled in the area in the early 1900s, when many came to work as bellhops, maids, waiters, and as other service staff at the West Baden Springs Hotel.

“The church was made up of highly educated people who lived under threat of Jim Crow laws but ignored them to help anyone who needed it,” says historian Elizabeth Mitchell, who is heading a documentary on the building. “Unlike other places, they weren’t run out of the community. The jobs just dried up.”

The church became largely vacant in the 1990s, and eventually, the local historical society and then the Town took ownership. The building’s endangered status drew the attention of the Southeastern District Association of the Indiana Missionary Baptist State Convention. The group purchased the building for $1, promising to restore it as a place of worship and tapping Second Baptist Church in Bloomington to spearhead the rehabilitation.

A dedicated group of volunteers led the project, collecting donations and doing hands-on work. Workers saved original pews and the bell tower and incorporated part of a stained-glass window salvaged from a historic church that had been torn down near Terre Haute.

As the project nears completion after pandemic-related delays, the group is making plans to celebrate with a rededication.

“I knew I had people in my congregation who used to rehab houses that had the skills to do this and really felt like the Lord was saying we needed to take the lead on it,” says Dr. Bruce Rose, pastor of Second Baptist Church. “Every time I couldn’t see how we were going to do it, the Lord would provide. It’s been really challenging but so rewarding, and a walk of faith.”