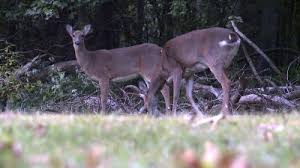 INDIANA — Seventeen Indiana state park sites will be closing their gates to visitors for a pair of two-day deer hunts later this month. The hunts are scheduled for Nov. 15-16 and Nov. 29-30, with the parks closing the evening before and reopening the next day.

The annual deer hunts began in 1993. The Indiana Department of Natural Resources directs wildlife biologists to evaluate the parks and determine where the hunts are needed to ensure healthy habitats for native plants and animals.

Only hunters previously selected in DNR drawings can participate.

The agency reported that 1,243 deer were killed in last year’s state park hunts. Versailles State Park had the most killed with 205, followed by Brown County with 143 and Chain O’Lakes at 135.