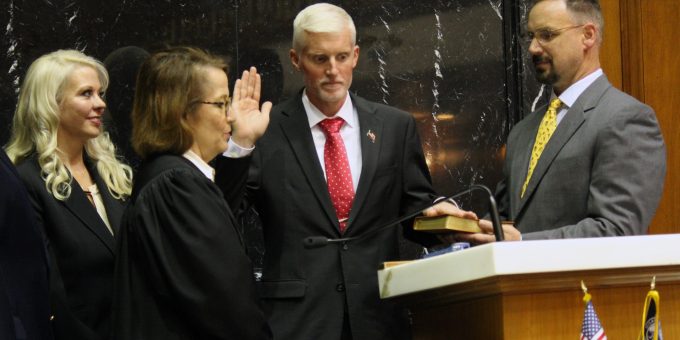 Indiana Supreme Court Chief Justice Loretta H. Rush administered the oath in the House Chamber of the Statehouse during a formal swearing-in ceremony. Davisson will serve the remaining term of his late father, former State Rep. Steve Davisson of Salem, who passed away in September.

“It’s an honor and privilege to have the opportunity to serve our community at the Statehouse and to carry on the legacy and work of my father,” Davisson said. “I strongly believe in, and will always advocate for, a limited government that lives within its means – just as Hoosiers do every day. I’m looking forward to diving into this upcoming session and using my experience to keep Indiana’s momentum moving forward.”

Davisson is a lifelong resident of Salem. He previously served as chair of the Washington County Young Republicans and for nine years on the board of directors of the Indiana War Memorial Commission. He currently operates a family-owned pharmacy in Salem.

Davisson is also an Army combat veteran of Afghanistan and Iraq, and he retired in 2017 after 17 years of military service.