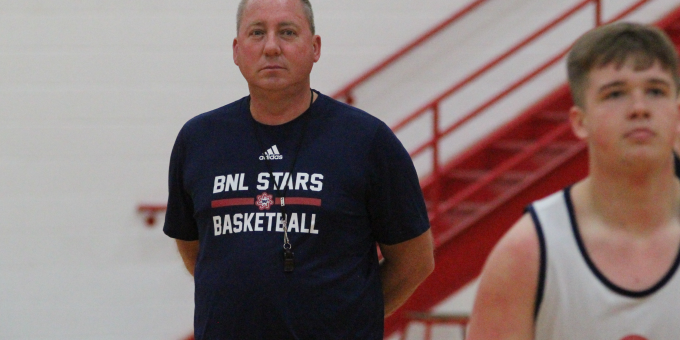 BEDFORD – Decisions, decisions, decisions. Jeff Hein, starting his third season as Bedford North Lawrence’s head coach, faces more questions than a nervous lawyer taking the Bar exam. And the answers aren’t scribbled on the back of his hand.

The Stars started official practice sessions for the onrushing 2021-22 campaign on Monday afternoon, and the self-examinations shifted to an intense level as the competition for the coveted varsity, junior varsity and freshman jerseys got serious. Hein welcomed 43 athletes to the opening day, and that’s way too many.

So that’s the first question: who makes it? That will be determined over the next few days, perhaps not until the team photographs (scheduled for Saturday) are taken. And that’s just the tip of the query iceberg. Ever heard of the 5 Ws of investigation: Who? What? When? Where? Why? This story will be quite interesting as it develops.

“We’ve got a lot of decisions to be made,” Hein said as he started to identify all the possible scenarios. “Let’s give it some more time and let it play itself out. We don’t have a whole lot of time, but it’s who will continue to work hard and who will beat someone out. Who will step forward?”

Other questions: who replaces the three graduated starters? Who fills the void until junior Colten Leach – still recovering from his second off-season knee surgery and possibly out for the first month of the season – returns? When will Leach, who averaged 13.6 points and was named to the All-Hoosier Hills Conference team, be full speed? Where are the big guys? Because BNL would benefit from division by height rather than class. Is there a 6-foot-2-and-under league?

“There’s a lot of questions marks,” Hein said. “We’re filling some very important roles. We don’t have any 6-foot-5 kids like Jackson Miracle walking around right now, we have to find people to replace (Kooper) Staley and (Ben) Cosner, who did a lot of good things and hit a lot of big shots the last couple of years. So there’s a lot of things to be seen, and it could change day to day.”

Day by day, the chance you gotta take, the price you gotta pay. BNL will ultimately decide by the old-fashioned code. Earn it, prove it.

“Competition is good,” Hein said. “We’re young, but the intensity level has been unbelievable since the football kids came out. Things have changed dramatically, in terms of the competitiveness. That’s a good thing. The level you have to play at a 4A school is tough. We do have kids who are vocal and not afraid to tell someone when they’re not doing something right. They will hold each other accountable.“

The culling and shifting process will continue this week and reach a critical stage on Nov. 15 when the Stars stage their annual intrasquad scrimmage. Will some freshmen make the junior varsity, maybe even the varsity? Possible. Will a scorer step into the spotlight? Can BNL back up last year’s 14-11 record and the run to the sectional final with another impressive season?

“We played a lot of games this summer, and we still don’t have all the answers yet,” Hein said. “We’ll learn a lot during the soap and towel, we’ll learn a lot when we go to Martinsville (for the IHSAA scrimmage on Nov. 19). I learned a lot this summer, but now it’s a completely different feel.

“If I had to sit here and tell a starting lineup, I couldn’t do it. And I don’t know that we’ll know on Monday. We’ll probably split the teams evenly and see what happens.”

The toughest question to answer is how good BNL will be. How good can a team with as few as one senior, with little returning experience, with no size, become? Hein sees potential. How quickly it develops? Great question.

“I don’t want to write this season off by any means,” he said. “Once these guys get some experience, we have a chance to be pretty good. How soon will that be? It could be two months, or at the end of the year? Or next year? I don’t know.”

Hein owns a 29-21 record in two seasons with the program and 324-227 overall. Defense has been his trademark. BNL allowed only 51.2 points per game last season, marking back-to-back years of allowing only 51 for the first time in over 35 years. That will still be demanded, youth or not.

The Stars will open the regular season at Bloomington North on Nov. 23.