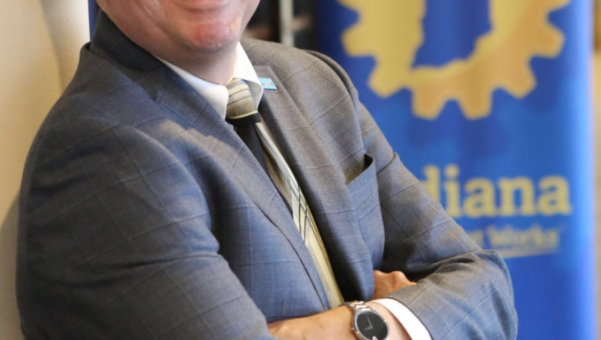 VALPARAISO –  Nearly 325 people were registered to attend the event, many of them interested in topics and trends that could have an impact on their companies in the coming year. Donald Babcock, director of economic development and community relations with Purdue University Northwest (PNW), was the emcee throughout the event.

Allison Bertl, executive director of workforce programs and services with the Indiana Department of Workforce Development (DWD), spoke about the Next Level Jobs initiative, incumbent worker training, and understanding the Workforce Innovation and Opportunity Act (WIOA). She explained that over 725 Hoosier businesses applied for Employer Training Grants this year, many of them small to medium-sized. They have been using the funds to upskill their workforce.

As for the WIOA, which is designed to connect job seekers to training and support while also matching employers with skilled workers, Bertl described the ways in which the program can be used to avert potential layoffs and upskill workers to foster internal job promotions.

“Skill deficiencies are barriers to employment. These programs, if leveraged appropriately, can really benefit both employers and employees,” Bertl said. “We assess individuals and company plans to ensure people are as prepared as possible for new opportunities.”

Steve Skalka, SVP and trust investment manager with Horizon Bank, spoke about equity and fixed income markets. The first quarter of this year reflected very strong growth as our society began reopening, and that slowed as the year progressed. Consumer activity is slowing down currently, arising out of concerns about the virus and weaker confidence.

“We saw a correlation with the rise of Delta came the decline of confidence and spending,” Skalka said. “Shortages have also been a drag on growth. U.S. equities, though, have been amazingly resilient – because really, there is no alternative. Global valuations are a concern though because earnings growth is projected to trend down. Return expectations are 7% annualized over the next five years, which means lower returns than average, but not bad.”

Peter Novak, CEO of the Greater Northwest Indiana Association of Realtors (GNIAR), spoke about residential real estate markets. He explained that NWI has been experiencing considerable rises in home prices. This is part of a national phenomenon and is largely due to demand greatly outpacing supply.

“The big theme of what is happening in residential markets right now is inventory,” Novak said. “Buyers are desperate. We’re selling more homes than ever before in NWI and we’re doing it with basically no inventory. Prices are rising dramatically as a result.”

Along with the home, inventory shortage has also come a shortage of available rental properties. Novak said renters, like home buyers, have less to choose from and prices are also rising in the rental market. He also added that interest rates are expected to be higher in 2022 and housing prices will continue to appreciate, but at a lower level than 2020/21.

Ty Warner, executive director of the Northwestern Indiana Regional Planning Commission (NIRPC), delivered his presentation on economic recovery and the value of the place. He explained that NWI has been working to develop its assets and make the region a more desirable place to live and work.

The Census conducted in 2020 showed the counties of Lake, Porter, and LaPorte had a population increase of 1.6% over the last 10 years. The data showed that other Indiana regions that have made bigger investments into quality-of-life amenities have experienced greater growth.

Warner also explained that NIRPC’s research has been focused on how and why people travel throughout NWI. Even before the pandemic, the number of shopping trips was declining, and ecommerce was rising. As such, the organization has been looking into ideal locations for warehousing and ecommerce operations.

NIRPC has CARES Act funding available for businesses that have incurred losses as a result of the pandemic. NIRPC also received funds under the Northwest Indiana Economic Resiliency Plan, which aims to make the region more resilient against future disruptions. Another project the organization is supporting is the activation of the fiberoptic internet systems that run beneath the Indiana Toll Road, which has the potential to make NWI a quantum corridor.

“Spread the word about these programs,” Warner said. “It doesn’t matter how many ways you have to get there if you have no place anyone wants to go. Our goal is to make the region a place people want to locate. People are seeking places that have the amenities that they want, not just the job they want as people have in the past.”

Mike Noland, president, and general manager with the Northern Indiana Commuter Transportation District (NICTD, South Shore) spoke at the Business and Economic Outlook about the Double Tracking and West Lake Corridor projects taking place along the South Shore rail lines. These are the largest transportation investments in the history of Indiana.

“Visions of these projects go all the way back to the ‘80s. We’re finally bringing $1.5 billion dollars worth of projects to northwest Indiana and we’re just about to put shovels in the ground,” Noland said. “It’s so much fun to change the conversation to not ‘if’ but ‘when.’”

There is projected to be an excess of $2 billion in private investment from these projects with potentially 7,000 new jobs. Increased ridership into Chicago is expected to bring new wealth to Indiana due to the 40% higher average salaries in the city.

The main construction contract for the Double Track project is anticipated to be awarded during the construction season of 2022. It is a 26-mile stretch of track between Gary and Michigan City that will effectively cut the ride time between the two cities in half. 14 new trains will be added to the South Shore’s service. The project could be completed in 2024.

The West Lake Corridor, when complete, could provide a 45-minute ride from Dyer to Chicago. It runs north to south along the western border of Lake County. The forthcoming Hammond Gateway Station will be the nexus connecting the West Lake Corridor with the double-tracked South Shore Line. The project will begin in early spring 2022 and should be open in 2025.

Demolition work is currently taking place surrounding both rail projects. About 150 homes have been acquired for the project out of a total of 400 total properties that will need to be demolished. The next step NICTD is working on is an attraction of private investment and zoning.

William Sheldrake, president of Indianapolis-based Policy Analytics, LLC delivered data on the economic impact of the upcoming South Shore projects. Over 20 years, the projects are expected to generate a $310 million state sales tax increase and a state income tax increase of $192 million, among other increases.

“We’ve seen a lot of great, high aspirations in many of the communities surrounding these developments. These are huge, huge investments. The encouraging thing about these is that they’re happening now. Not just the rail projects, but the community planning and engineering around them. The communities seem to really be responding well,” Sheldrake said.

Anthony Sindone, clinical associate professor of finance and economic development with PNW, delivered a regional economic forecast that also encompassed the state and national levels. From 2011 to 2021, Indiana’s GDP growth rate at 1.756% is similar to the national rate and reflects an upward trend from the pits of 2020. However, NWI’s growth rate is much different. It’s basically near zero, at -.2%.

Real income per person in NWI has not shown much growth from 2011 to 2021 and is outpaced by Indiana and the national rates.

“We’re seeing a transformation of the skills required of the jobs anticipated over the next five years,” Sindone said. “People are going to have to learn new things. Jobs will be different.”

Unemployment is trending down, which is a good thing on the surface. But people are leaving the labor force at a very high rate. Labor force participation rates have gone down to just over 58%.

“Many employers are having a difficult time finding people. Why is that? Some people think it’s because of the extra unemployment assistance. Some people think people just want to stay home. The way I look at it is, people got used to earning income from home, and taking care of their kids while earning income from home,” Sindone said. “Workers got beat up during the pandemic. People who had to go to work went to work. Now that things are opening up, people are saying they’re done. They need a break.”

According to the Bureau of Labor Statistics, the rate of people quitting their jobs is higher than at any point since 2001.

NWIBRT hosts the Business and Economic Outlook annually. It is a free event, open to anyone to attend, and is held on the first Friday in November. Mark your calendars for next year and attend.