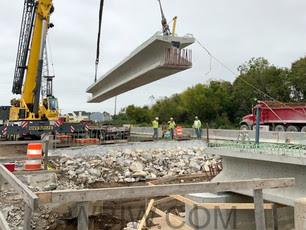 INDIANA – The I-69 Finish Line project is building 39 new bridges and rehabilitating or replacing another 35 bridges. Installation of structural beams is a sign of construction progress throughout the project.

Last week, bridge crews placed the remaining bridge beams needed for the new northbound I-69 lanes in Morgan County. This week, contractors expect to use cranes to hoist the large concrete beams into place at three locations:

The beams are typically delivered and staged near the bridge in the afternoon and installed overnight to minimize traffic impacts. Safe installation over the road requires multiple traffic stoppages of up to 20 minutes each.

Both directions of S.R. 37 will experience 20-minute traffic stoppages near Teeters Road between 9 p.m. Monday and 5 a.m. Tuesday.

Continue to watch for construction traffic where S.R. 252 meets the new I-69. Crews are paving entrance and exit ramps and removing excess soil used to compact either end of the bridges.

The Cramertown Loop closure has been rescheduled to 2022 when I-69 is able to provide an alternate north-south route between S.R. 252 and Artesian Avenue.

Northbound and southbound S.R. 37 traffic is expected to shift toward the center median today near Olive Branch Road/County Road 800 N.

Click here to view a map of the new route.

The New Keystone Avenue bridge beams have been installed over I-465 westbound, and night work is now occurring over I-465 eastbound. Drivers should expect long delays between 11 p.m. and 4 a.m. and use alternate routes, such as I-65 and I-70 or the I-465 north leg.

Stay alert for increasing construction traffic on S.R. 37 just north of Southport Road. Contractors have begun excavation and footings for the future Southport Road bridge over I-69.