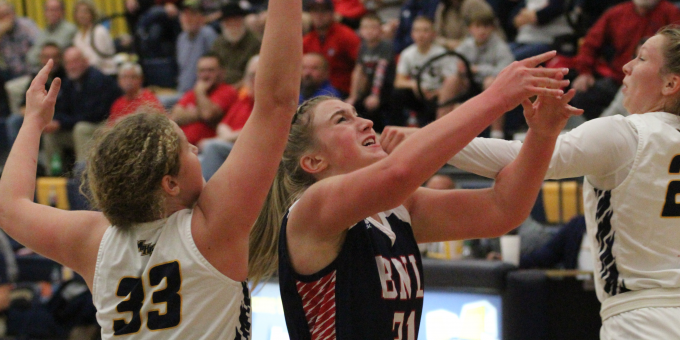 BEDFORD – Nothing satisfies that competitive hunger more than a road victory over a tough, quality opponent. Bedford North Lawrence, a program that does not – and should not – back down from a challenge, got its fill during the season-opening win at Mooresville.

Now the focus turns inward, to correcting some exposed issues, to tweaking the strengths, to getting better on a consistent basis as the adrenaline rush of a new season dissipates and the reality of the grind begins.

The No.4 Stars will start Week 2 on the road again, visiting Bloomington North on Tuesday night. And there’s plenty to work on while settling in for the long haul. Three months of preparation starts now, especially with a game film to dissect.

For the most part, that film study is definitely positive. After a sputtering start, after falling down 7-2, the Stars regained control with a 19-0 run in the first half, withstood a determined comeback, maintained their composure when physically and mentally tested.

The good? Karsyn Norman’s offensive leadership and 21 points during the 47-44 triumph. Ella Turner’s quality minutes off the bench. BNL’s defense during the first-half burst and during some fourth-quarter offensive struggles.

“There were some really good things,” BNL coach Jeff Allen said. “We had a shell-shock start, but we responded. We played great defense in the first half. And I liked our composure. That’s a tough place to be. The game got extremely physical, so it was a great road win. Right out of the gate, that’s a tough place to open.”

What to work on? First, sophomore star Chloe Spreen battled through double-team ambushes and entanglements. She scored 13 points (and added 8 rebounds) but got a little tired from the constant banging (and the vocal harassment from the student section). That’s going to happen a lot as a scouted target and main threat. She will need a release valve for that pressure, to create openings for her many talents.

“We have to adjust to it as a team,” Allen said. “If people are going to do that and take her away, we have four other kids out there that can hurt them. Just make them pay for guarding us that way. If we can do that, they’ll abandon that strategy.

“She got a little frustrated, but it’s a tough position to be in. She feels like she has a lot of responsibility on her shoulders, and it’s tough when you get doubled and trapped, get beat on, no matter how good you are.”

Second, the Stars only went six deep in the substitution rotation. BNL’s main core of Spreen, Norman and Madisyn Bailey didn’t leave the court. Ella Turner had outstanding minutes off the bench (hit her only shot and had four rebounds), so now BNL (without injured guard Emma Brown) will seek to identify those seventh and eighth spots.

“Ella did a great job of knowing her role, of competing and battling at that level,” Allen said. “I was really happy with her play. I really think the next person will be Emma Crane. She’ll still coming back from injury and hasn’t played since Columbus East (last season). So it’s taken a little time. She gives us size and strength, plays hard. It’s all about getting back to being able to compete at that level. And Hadley (Teague) can help from the standpoint of being intelligent and running stuff when I ask her to do it. So hopefully we can get the minutes we need out of those kids.”

The clash with North will give the Stars a chance to do all those things.

The Cougars are 1-1. They started with a 59-49 loss to Northview, then rebounded with a 40-38 overtime win (despite going scoreless in the fourth quarter) over Greenwood on Saturday. North will feature junior guard Avery Patterson (19 points, including five treys, against Greenwood), sophomore Ava Reitmeyer (13 against Greenwood) and sophomore Mia Robbennolt (12 in the opener against Northview).

BNL has totally dominated this series the last decade, winning 10 straight – the last seven by an average of 45.4 points. Last season, the Stars crushed the Cougars 80-26, forcing 34 turnovers while Spreen scored 19 points. BNL scored 43 consecutive points during one span, owned a 47-3 lead at halftime and gave up only 5 points until the 1:30 mark of the third quarter.

The Stars won’t worry about the past, just how their present performance will dictate the future.

“The first thing is getting off to a better start on the road,” Allen said. “We were lucky to come out of it on Friday night. That’s not something we typically do. We want a great start. And even as good as we played defensively, there are things to adjust. So it’s about us and finding our footing before we get into the meat of our schedule.”

Game notes: BNL has won 10 straight in the series, winning the last seven by an average of 45.4 points.