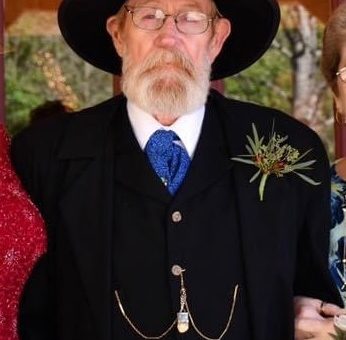 Born November 11, 1944, in Indianapolis, he was the son of Harry and Volnie (Morris) French. He married Veronica
Lynn Branam on April 10, 1965, and she survives.

He retired as a job setter at Allison Transmission. He was the Marshall of the Lost River Renegades participated in the French Lick Train Robbery reenactments. Ted was an ordained minister and officiated his granddaughter’s wedding in 2018. He was an avid fisherman, enjoyed hunting, and riding horses. But spending time with his family was by far his favorite pastime.

He was preceded in death by his parents, a brother, Rondal French, a sister, Frieda Hammons.

Funeral services will be conducted at 1:00 p.m. on Tuesday, November 9th in the Elmwood Chapel of the Day & Carter
Mortuary with Tim Adams officiating. Burial will follow at 3:30 p.m. in the Pleasant Valley Cemetery. Visitation will be
from 10:00 a.m. until the hour of service on Tuesday at the Day & Carter Mortuary.

The family asks that friends consider memorial contributions be made to the Lawrence County Cancer Patient Services.