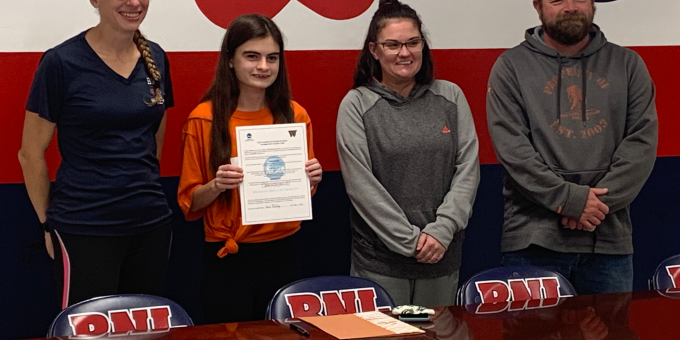 BEDFORD – For all the miles Grace Tanksley has logged during her career, she’s going an even greater distance.

Tanksley, a three-time semistate qualifier for Bedford North Lawrence, officially signed with Waynesburg University on Thursday afternoon. She will be making the long journey to southwestern Pennsylvania, and making the adjustment to the longer college distance, to compete with the successful NCAA Div. III program.

She didn’t waste any time putting her signature on the dotted line, and that’s typical of her running style. No wasted steps, no squandered time on the course. She finished with a career-best finish of 19:46.3 in the IHSAA semistate at Brown County (45th in the field).

Waynesburg coach Chris Hardie made the trip to watch that race, and his pursuit of Tanksley was one of the reasons she chose his program.

“After my junior year, they really started recruiting me,’” Tanksley said. “And that’s when it felt like it would be fun to do. It’s something I love. They have a good program, it’s a small, homey town (population 4,000, 50 miles south of Pittsburgh). So I feel like I will be really comfortable there. If I’m going to college, especially out of state, I will be comfortable.”

“Over the summer, I ran a half-marathon,” Tanksley said. “I will be running another this winter. So it won’t be too difficult.

“I got better each race, especially the last one. Most people don’t get to say they had a personal record in their last race. That’s pretty hard. Some athletes don’t have room to grow, but that showed me I can do better. I can be faster. I can find that in myself.”