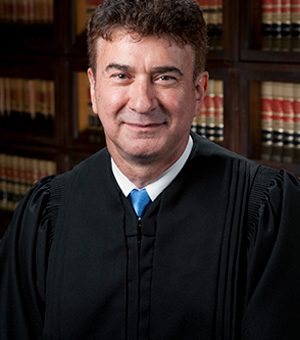 INDIANA – Indiana Supreme Court Justice Steven H. David will step down from the bench in the fall of 2022 after nearly 30 years as a judicial branch leader. He is Indiana’s 106th Supreme Court justice and the longest-serving justice currently on the Court. In addition to his commitment to the Indiana Judiciary, David retired from the United States Army in 2010 with the rank of Colonel.

Chief Justice Loretta Rush pointed to Justice David’s public service ethos saying, “Justice David’s deep commitment to our Hoosier justice system and his tireless work have been aimed at upholding the rule of law and improving the judicial branch statewide. He will be greatly missed.”

“Justice David’s commitment to service combined with his passion for the rule of law has made an extraordinary impact not just on Hoosiers but our nation as a whole. Serving with distinction as a military judge, trial court judge, and justice of the Indiana Supreme Court, his contributions go far beyond the bench. Giving of himself unfailingly to help others, Justice David embodies what it means to be a humble servant-leader and the legacy he is leaving is truly remarkable,” said Governor Eric Holcomb.

Justice David’s distinguished career took him all over the world, but always happily back to the Hoosier state. He was born in Allen County, raised in Bartholomew County, and spent most of his professional life in Boone County. His ancestors settled in Brown County in the early 1800s, and David and his wife now reside near where he grew up, just a few miles from the David Cemetery in Brown County. David’s son, Colin, lives in Indiana and is a graphic artist. His daughter, Danielle, who is is a nuclear pharmacist, lives with her husband Casey, and their three children in Missouri. David’s wife, Catheryne Pully, is an attorney and Indiana State Bar Association employee. Pully holds the rank of Commander in the United States Navy Reserves Judge Advocate General’s Corps and has recently been recalled to active duty to serve as General Counsel for the two-star Admiral responsible for managing, training, and administering the 110,000 men and women in the U.S. Navy Reserves.

David graduated cum laude from Murray State University as a Distinguished Military Graduate on an R.O.T.C. scholarship. He earned his law degree from Indiana University’s Robert H. McKinney School of Law. He served in the United States Army Judge Advocate General’s Corps on active duty until 1986 and reserve duty until 2010. His service included two post 9/11 mobilizations to Iraq and Guantanamo Bay, Cuba. He served as trial counsel, defense counsel, Military Judge, Training Officer, Staff Judge Advocate, held two commands, and was selected by the Secretary of Defense in 2007 to serve as Chief Defense Counsel for the Office of Military Commissions.

In addition to his time in the military, David worked in private practice and as corporate counsel. He also served as an elected trial court judge. In 1994 he was elected (and subsequently reelected) to the bench in Boone County where he served until his appointment to the state’s highest court.

In reflection of his wide-ranging service, Justice David stated, “I am so proud and humbled to have served the people of Indiana and the people of this great nation for my entire professional life. From 1982 through 2010 I served as either a full time soldier or as a part time soldier in the United States Army Reserves. From 1994 until next year it will be almost 30 years that I have served as a judicial officer. Service to others has been my great honor. I am humbled to have served. My journey has been nothing less than a dream come true. We have the greatest Supreme Court in the nation and the best judicial system anywhere, and we are all constantly working together to make it better! I salute Chief Justice Rush and my colleagues on the Supreme Court. They are truly amazing law partners. Chief Justice Rush and I were trial judges together and have been friends for many years. It has been my distinct honor and sheer joy to work with her not only on our core mission but together with so many justice partners to improve our systems and to make Hoosiers proud. I look forward to the next chapters in my life and ways in which I can continue to serve and make lives better.”

Justice David was appointed to the Court by Governor Mitch Daniels in 2010 upon the retirement of Justice Ted Boehm. During his tenure, he has served with eight justices including Dickson, Goff, Massa, Rucker, Rush, Shepard, Slaughter, and Sullivan. He has authored 202 civil and criminal opinions (158 majorities and 44 non-majorities) with more opinions to be authored until his retirement. A state and national leader of the judiciary, David has devoted time to civic organizations such as National Mock Trial and legal affiliations such as the Appellate Judges Conference (Chair), served as an adjunct professor, and authored numerous publications. A more complete biography and high resolution photograph can be found online.

Justice David will step down from the bench in the fall of 2022. The Judicial Nominating Commission will search for a successor to fill the vacancy. Applications for the position will be made available on the Court’s website. After he retires from the Court, David intends to serve as a senior judge and will continue to chair the Commission on Equity and Access as well as Indiana’s Conference for Legal Education Opportunity.