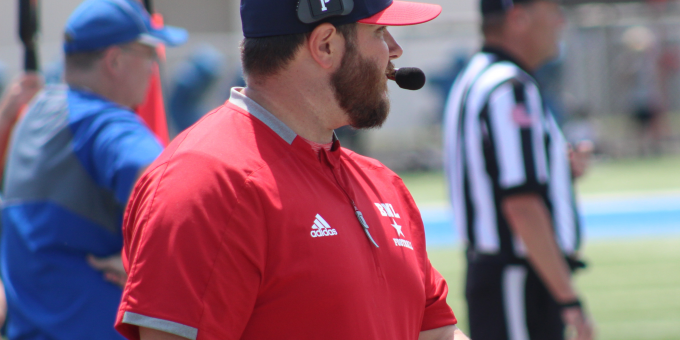 BEDFORD – The final sound of a season is the saddest. It’s the silence. When the crash of the pads, the cheers from the stands and the chills from victory fade to black, replaced by fleeting echoes and a deafening hush in the locker room, it’s a difficult day.

Bedford North Lawrence’s campaign, the first under new coach Derrick Barker, ended with the soft slosh of raindrops and tears on a dreary Friday night. The Stars were not prepared for the sudden conclusion, one tournament game, that marked the end of the 2021 season. BNL suffered an 18-10 loss to Seymour in the opening round of the Class 5A sectional, capping a 4-6 record.

Time to store the gear and uniforms, to hug the departing seniors and hear the last locker door clang shut. And it’s time to reflect on an interesting, captivating journey. After an 0-2 start, after catching fire in midseason and winning four times in six weeks, after concluding with back-to-back disappointing losses, there’s a lot to digest, discuss and discover.

The good, the bad and the unpleasant. This year had it all. Barker’s first priority, taking the helm after a 2-7 season in 2020 ended with a dull thud when the postseason was taken away by positive virus tests, was to solidify, to establish a culture of discipline and dedication.

The good? BNL’s commitment to accountability. The bad? BNL’s lack of off-season weight work in the past. That changed. The unpleasant? The final two losses, especially the finale as Seymour avenged a regular-season loss and denied the Stars a rare tournament triumph.

“I think it went well,” Barker said. “Right now there is still a sour taste from the last two games we played, not playing our best. But as time goes on, looking back, we made improvements on the field, there’’s no question about that. And some of the stuff we did as a program, off the field as far as the community and school engagement, it was a good year. We made strides and the kids enjoyed it. That’s the most important thing. This year you could see the family atmosphere, kids playing for each other.“

On the field, BNL made significant changes. Sophomore quarterback Memphis Louden took over the offense when Brye Lewis was shifted to full-time defense. Louden threw for 1,346 yards and 13 touchdowns. Lewis strengthened a defense that had been porous, especially against the run. Louden spread the ball among five receivers with double-digit catches while Zane Anderson was the main backfield threat.

“We improved offensively as far as distributing the ball, being more balanced, not being reliant on the triple-option to move the ball,” Barker said. “We incorporated some run game. We knew we would have a lot of weapons. If you look at our stats, we were pretty balanced. No one guy stuck out over the rest.

“Defensively we played better, limiting the explosive plays. Last year we missed a bunch of tackles and gave up long runs, some busted-coverage plays. And we did a better job of taking the ball away.”

Indeed, the Stars pocketed 10 interceptions (with Jesse Brock ranking among the state leaders with 5). They gave up 26.2 points per game (down from 33.6 the previous year). That’s a touchdown per game. Still not the 1985 Chicago Bears, but it’s a start in the right direction. Barker traced that to improved strength and speed.

“We made a lot of progress in the weight room with our size and strength, but we still need another year to get where we want to be, maybe even two years,” he said. “It will take effort, it will take time. The last couple of games, we were still a little light. We need to be able to control the line of scrimmage, both offensively and defensively. For running the ball and stopping the run, for pass rush and wearing teams down.”

“A lot of talent, but more importantly a lot of great leadership, kids that just really worked hard,” Barker said. “They came to work every day, making the younger guys better. Any time you lose kids like Brye Lewis, Grant Todd, Zane Anderson, we have to find guys that can move the football in their place. There’s big shoes to fill. It’s not just replacing them but going to the next level and being better than what we lost.“

BNL’s reloading with start with Louden, with receivers Dylan Nikirk (24 catches for 479 yards, 3 TDs), Ryker Hughes (23 for 453, 5 TDs) and Kole Bailey (12 for 190 yards), with running back Piaire Childs (who averaged 6 yards per carry and scored 4 TDs). Offensive lineman Kline Woodward and Junior Arellano will also return.

“It starts with the skill positions,” Barker said. “We’ll have a lot of guys to carry the ball, catch the ball. With Memphis coming back, he can be the guy to distribute it. He did a good job as a sophomore, so it’s exciting to see what we can do with another year with him.

“We were so diverse and so multiple, at times we needed that one play to hang our hat on. We need to find the one play, when we need it, we can rely on it.”

On the defensive side, the strength will be the veterans at linebacker (Tyson Patterson, Collin Whitaker and Kaedyn Bennett) and the defensive secondary (Colton Staggs, Maddox Ray and Trace Rynders). Greg Gilbert will anchor the front line at nose guard.

What can BNL accomplish in the future? This year’s junior varsity was undefeated, which is promising. Next year’s senior class will be the first to go through the high school after playing in the combined middle school system, which so far has yielded bigger classes. Barker expects a senior group of 25-30.

The Stars showed their potential with the midseason wins over Jeffersonville (48-13), Seymour (35-29), Jennings County (47-14) and Madison (41-6) but also revealed shortcomings with the setbacks against Floyd Central (24-13), Columbus East (31-15) and Seymour in the sectional.

“There were times we really had momentum going, so it was a setback to finish with the losses,” Barker said. “It’s more so what kind of benefit we could have gotten from winning that game (against Seymour), playing for a sectional championship. That would have been big.”

BNL has won only 11 postseason games in program history and one sectional title. That’s the ultimate measuring stick.

Barker will also have a year under his belt. He learned a lot during his “rookie” season.

“There were moments that were stressful,” he said. “It was interesting. Everyone says when you’re the head coach you don’t spend as much time on the Xs and Os, and that was definitely the case. Instead of doing one or two things well, you want to make sure you’re taking care of all phases of the program. It’s all equally important.”

The Stars will start off-season workouts in December, beginning the countdown toward spring sessions, toward the summer camps, finally toward the first day of practice for the 2022 campaign. From the sound of things, it can’t come soon enough.