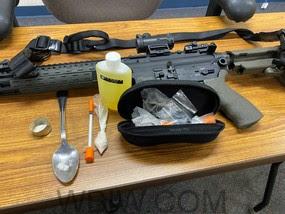 SALEM – On Thursday, October 28, a Kentucky man was arrested on drug and weapons charges after being reported as a possible impaired driver.

Thursday afternoon, an Indiana State Police trooper responded to the Circle K gas station in Salem after someone called 911 to report a possible impaired driver at the store.

When Trooper Taylor arrived he found a man slumped over the bed of his truck in the parking lot. After gaining his attention, the man identified himself as 35-year-old Justin Kelley of Hazard, Kentucky.

Upon further investigation, a vehicle search was conducted. During the search, Kelly was found in possession of approximately 3.5 grams of suspected Heroin, multiple syringes, synthetic urine, drug paraphernalia, and a Sig Sauer rifle.

Kelly was transported without further incident to the Washington County Jail.