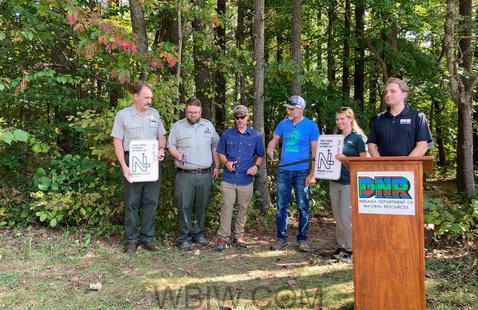 Funding for the project included a Next Level Trails (NLT) grant to HMBA, which provided the required match.

Limekiln East is the second of three mountain bike trails to be completed in the state park as part of a $200,000 NLT grant to HMBA to develop 7.5 miles of a new mountain bike trail. The first, Weed Patch Trail, a 2.4-mile intermediate-level trail, opened in November 2019. The three new NLT-funded trails will connect with existing trails as well as other park amenities, including the campground, park office, nature center, and Hesitation Point. Once completed, the three new trails will bring the total mileage of mountain bike trails within the state park to 43.5.

The park’s existing Limekiln West Trail connects the campground to the Hoosier’s Nest, fire tower, and park office. Before the Limekiln East Trail opened, beginner mountain bike riders (and hikers and runners) used Limekiln West as an out-and-back. The addition of Limekiln East transforms the former out-and-back into a 3.7-mile beginner directional loop for the park’s daytime visitors. Limekiln East not only adds miles for both new and experienced riders, it also reduces congestion on the popular trail.

“Brown County State Park is a premier destination for mountain biking in the Midwest and the new Limekiln East Trail only cements that reputation,” said DNR Director Dan Bortner. “Thanks to Next Level Trails and HMBA, trail users of all abilities will have an additional opportunity to experience the park.”

As part of Gov. Eric J. Holcomb’s Next Level Connections initiative, NLT funds the development of regionally and locally significant trails throughout Indiana. The Brown County State Park NLT project was awarded in May 2019 as part of the first round of NLT funding, which included $24.9 million for 17 trail projects. Gov. Holcomb announced the second round of awards this March, bringing the total of NLT funds awarded thus far to $54.3 million for 35 projects that will develop more than 112 miles of trail.

Gov. Holcomb announced an additional $60 million of funding for NLT in April, bringing the total for the trail grant program to $150 million. Applications for Round 3 of NLT, in which $35 million will be available to local units of government and non-profits, will be accepted through DNR from Nov. 1 to Dec. 1.

Mountain bike trails in Brown County State Park are multi-use and are open to hiking and trail running as well as bicycling. Riders should obtain a $5 daily or $20 annual off-road cycling pass before using park mountain bike trails. Passes can be purchased at gates, the park office, or at ShopINStateParks.com.

More information about NLT is at on.IN.gov/NextLevelTrails.