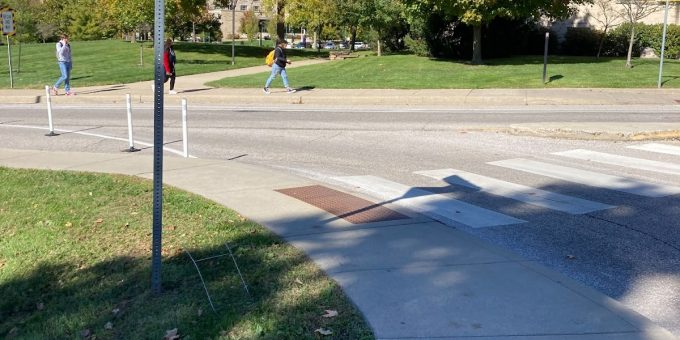 BLOOMINGTON – To address an ongoing safety concern, the City of Bloomington recently implemented changes to traffic patterns along East Third Street near the Indiana University campus where the road transitions from two-way to one-way traffic flow.

The changes are as follows:

The changes have been made to reduce the incidence of collisions in this area, and improve safety for users of all forms of transportation.  The Bloomington-Monroe County Metropolitan Planning Organization 2015-2019 Crash Report shows that the intersection of E. Third St. and S. Swain Ave. is among the top crash locations in the county.  Most collisions at this location have occurred when westbound motorists turn left at S. Swain Ave. from the northern (right) lane of E. Third St., presumably anticipating oncoming traffic but colliding with traffic coming from the same direction in the southern (left) lane.  The high volume of pedestrian, bicycle and transit traffic in this area further prioritizes safety concerns at this intersection.

Flexible delineator posts restricting traffic from the southern lane of E. Third St. between S. Mitchell St. and S. Swain Ave. minimize confusion at this location.  Temporary “New Traffic Pattern Ahead” signs have been installed on S. Mitchell St. to enhance driver awareness of the recent changes.  Drivers turning onto E. Third from S. Mitchell St. will encounter new “Yield” signs, and a “Begin One-Way” sign has been relocated to a prominent position in the unused lane of E. Third. St.

City staff continue to monitor the area and evaluate enhancements to reduce the number of collisions. The City requests all users exercise caution while adjusting to the new traffic pattern.  This change supports the City’s safety goals as described in the City’s Comprehensive Plan and Transportation Plan.