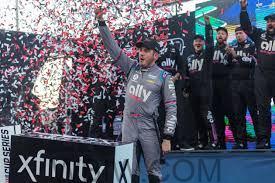 MARTINSVILLE, VA. – Alex Bowman won the Xfinity 500 to score his sixth career NASCAR Cup Series victory, his fourth of the season, and his first at Martinsville. His margin over second-place Kyle Busch was .478 of a second.

Race extended one lap past its scheduled 500-lap distance due to a green-white-checkered finish.

There were 15 caution periods for a total of 91 laps. Twenty-five of the 38 drivers in the Xfinity 500 finished on the lead lap.

Chase Elliott of Hendrick Motorsports (Chevrolet) was both the Stage 1 and Stage 2 winner.

Chase Briscoe’s 22nd-place result bettered his previous best finish at Martinsville – 27th earned in his first start at the track in April.

“Finishing on the lead lap at Martinsville is never a small accomplishment, but it was a frustrating day in a couple of areas,” said Briscoe. “Braking is so important here, and I had little to no brakes for about the whole race. And that made it difficult to find just the right changes to make to help our struggle with a tight-handling racecar and keeping the rear end on the racetrack. We’ve got one more shot to get a good finish for everyone out at Phoenix, so we’ll try to take advantage of the extra track time and get something out of it.”

The No. 14 Rush Truck Centers Ford driver picked up three positions to 19th in the opening laps and held steady until the competition caution on lap 60. He said his racecar “fired off pretty good, got a little tight, but otherwise the exit’s good.” He pitted for four tires, fuel, and slight left-side air-pressure adjustments. He restarted 15th when the race went back to green on lap 67.

Just four laps later, a three-car incident in turn four brought out the caution flag with Briscoe running 16th. He stayed on track and restarted 15th on lap 76.

Maintaining rear grip under braking proved problematic for Briscoe over the remainder of the stage. He dropped four positions before pitting at the break for four tires, fuel and further air-pressure adjustments.

The No. 14 Rush Truck Centers Ford driver said his racecar had better forward bite early in the stage but needed help in all other aspects. He was running 21st when the caution flag flew on lap 196 for a single-car incident in turn two. He pitted for four tires, fuel, and adjustments and restarted 19th on lap 203.

Briscoe held the position until the end of the stage. He reported that, in addition to the steadily building tight condition, braking had become particularly problematic. He pitted during the break for four tires, fuel, and adjustments.

The No. 14 Rush Truck Centers Ford driver said braking continued to be a problem and was now his biggest issue. He was holding down 19th place when the caution flag flew on lap 309 for a three-car incident in turn three. He pitted for four tires, fuel and air-pressure and trackbar adjustments and restarted 17th on lap 319.

Another caution flag flew on lap 324, this time for a two-car incident in turn three. Briscoe stayed on track and restarted 14th on lap 331.

Brisco had fallen back to 17th in the eight-lap run to the next caution flag for a three-car incident in turn two. He said his handling felt improved, but the braking issues made things difficult. He pitted for four tires, fuel, and adjustments and restarted 17th on lap 347.

A single-car incident, in turn, four brought out the caution on lap 357 with Briscoe having fallen back to 19th. He said the last round of adjustments did more harm than good. He pitted for a splash of fuel and a chassis adjustment and restarted 19th on lap 362.

The 15-lap run to the next caution for a single-car incident, in turn, two saw Briscoe drop to 22nd. He made slight right-front contact with the spinning car of Daniel Suárez ahead of him. He pitted for a quick inspection and took four tires and fuel before restarting 21st on lap 384.

Another single-car incident, in turn, two brought out the caution flag on lap 436 with Briscoe running 19th. He had just fallen off the lead lap, but he stayed on track to take the wave-around and restarted 19th on lap 443, back on the lead lap.

As mayhem continued with another single-car incident, this one in turn two, the caution flag flew on lap 473. Briscoe had fallen back to 21st, having struggled on the previous restart, but he stayed on track and restarted 18th on lap 477.

Tight handling persisted for Briscoe as he dropped four positions to 22nd in the 18-lap run to the next caution on lap 495 for a two-car incident in turn three. He pitted for tires and a chassis adjustment, restarted 22nd on lap 499 for the green-white-checkered finish, and held his position along the way.

Briscoe was the highest finishing NASCAR Cup Series rookie for the 30th time this season.