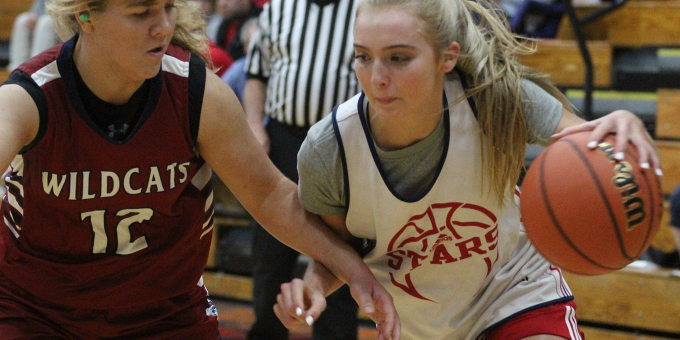 BEDFORD – Home school kids have, because of unfortunate stereotypes or unfounded prejudices, been viewed with negative connotations by pockets of society. And that’s just as wrong as any other profiling. Even the website for the Indianapolis Homeschool Wildcats, a non-IHSAA charter, states “a common misconception is that homeschool athletics is a non-competitive arena. This is wrong!”

And they proved that point on Saturday afternoon, going head-to-head with one of the storied programs in Indiana history and providing Bedford North Lawrence the perfect launching pad for the 2021-22 campaign.

The Stars, in their final public scrimmage before next week’s regular-season opener, got tested, probed and thoroughly examined before conquering the Wildcats 60-48. These Homeschool kids, who have a NCHBC national championship banner from 2019 hanging in their home gym, can play.

Chloe Spreen scored 22 points and totaled 9 rebounds, while Karsyn Norman added 16 points for BNL, which pulled away to a comfort zone but could never put away the competitive, scrappy Wildcats. Their motto is “We schedule anybody.” After playing 12 IHSAA programs last season, there is no fear factor. With senior wing Gloria Brewer, who will play college basketball at some level, there was a level talent field.

BNL, which scrambled to find a replacement scrimmage opponent when Heritage Christian bailed late, appreciated the willingness and the competitiveness of the Wildcats, who had a lot of claws to leave scratches. The Stars escaped with only a few wounds but also learned some valuable lessons as they went to school and finished preparation for the debut at Mooresville.

“It was a good scrimmage,” BNL coach Jeff Allen said. “We saw some good things from our kids, obviously some things we need to work on. I was really pleased. We had some good moments, now we have an idea of what we want to tweak this week.”

Good? BNL went on a 10-0 burst in the first quarter to take control, and the Spreen-Norman duo did all that work. Norman scored off an inbound set, popped an 18-footer in transition, pulled up for an 8-footer in the paint. Spreen won a battle for a loose ball in the lane and scored for a 19-10 lead.

From that point, the lead swelled to as many as 16, shrank to as little as 5, depending on BNL’s turnovers, rebounding issues and Brewer’s sheer talent. She had physical moves, a sweet shot, and defensive instincts to turn steals into points on back-to-back BNL giveaways. Brewer, who has played varsity since the 7th grade, kept the Cats purring and close while scoring 23 points.

Tweak? BNL had some unforced turnovers, some missed easy shots because of fatigue, some rebounding woes that will be a constant talking point again this season. The Stars will need depth, if the substitution rotations play out as expected.

“Turnovers were an issue,” Allen said. “We got a little gassed with conditioning, we missed some shots. But for the most part the kids did a good job of trying to execute. There’s still work to do on post defense, on rebounding, on being in position defensively. Those are things we can talk about. But we were playing pretty hard.”

Whenever the Wildcats got within claw range, BNL sidestepped the swipe. At 25-20, Mallory Pride scored off a Madisyn Bailey assist, and Norman swished a trey. At 39-33, Spreen scored 7 of the next 8 points as the Stars took a 47-35 advantage after three quarters. At 47-37, Bailey bombed a corner jumper and Carlee Kern sliced between defenders for a bucket.

The Wildcats, who were physical in the paint, had already scrimmaged Bloomington North earlier this week (and won 69-44, with Brewer exploding for 33 points). The one factor they did not have was speed. The Stars don’t have size, but they have a collective faster gear.

“They have some quick players, so we struggled with keeping them in front of us quite a bit,” Rosko said. “They work the ball around quickly, so it was good for us. We want the competition. Now we have film to watch.”

Pride and Emma Crane added 6 points each for the Stars.

BNL will travel to Mooresville for their debut on Nov. 5.