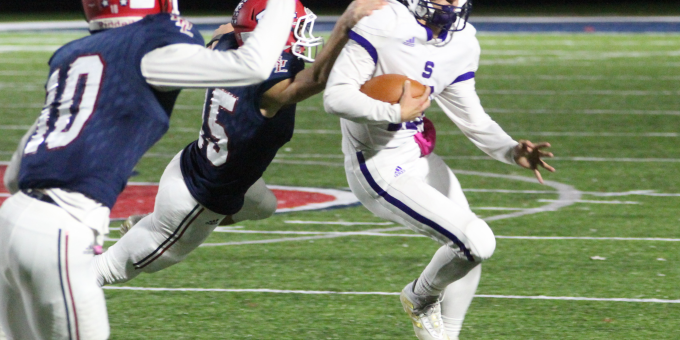 BEDFORD – Into each life, a little rain must fall. With apologies to Longfellow, a lot of rain – annoying, dismal, drenching – fell on Bedford North Lawrence as its postseason life was snuffed before it could even spark to life.

Seymour was singing in the rain, all the way to the sectional championship, and the Stars were left to bellow the same old sad song, another one-and-done sectional as the Owls won the rematch that mattered most. Avenging a regular-season setback, Seymour advanced to the title game while the Stars were slip-sliding away to mourn.

Bret Perry scored twice and threw a touchdown pass as Seymour (4-5) stunned BNL 18-10 on Friday night. That was the offensive story. The real narrative was the flip side, as the Owls – who had allowed 41 points per game until their last two victories – shut down BNL’s dysfunctional, confused and water-logged offense. BNL (4-6) was held to its lowest output of the year, and it couldn’t have happened at a worse time.

Blame the weather, which took away BNL’s passing-game strength. Credit the Owls, who used their two weeks of preparation to full advantage. BNL won the first clash 35-29, a shootout of unstoppable attacks. This time, forced to alter their personality and adapt to the miserable conditions, the Owls were wiser and better equipped.

Rain, rain, go away. Once it started, particularly in the second half, it never stopped. And BNL just wanted to play.

Seymour scored on its first possession and never relinquished that momentum. The Stars, accustomed to the explosive plays that ignite a scoring firestorm, couldn’t start the fire. The kindling was wet, and BNL’s history of postseason frustration continued another year.

The Owls capitalized on every opportunity they had. Perry engineered a 12-play, 63-yard opening drive, converting a third down with a 14-yard pass to Dylan Fields and ultimately scoring from 7 yards. They took advantage of a short punt and a defensive holding penalty to score in the second quarter, with Perry finding Fields from the 14. BNL never recovered.

“We challenged our guys, we had to score early and set the tone,” Seymour coach Tyson Moore said. “For us to march down and score, take that momentum, was huge.”

BNL got on the board late in the first half, cobbling together a 63-yard march that included two fourth-down conversions.The Stars finally stalled in the red zone, and Ryker Hughes booted a 31-yard field goal. But that was not the necessary ignition for the lackluster attack.

“They didn’t seem like they were alive, kind of shell shocked,” BNL coach Derrick Barker said. “Maybe they were a little uptight. When kids care so much and want something so bad, we could never make the one play to get us jump started. We were one or two momentum-flipping plays away.

“We couldn’t get a break. Everything that could go their way, went their way.”

The first possessions of the second half proved that theory. After Zane Anderson rumbled 28 yards on the first carry of the BNL drive, he got hammered three plays later as Seymour’s Cameron Klakamp forced a fumble that Jaylan Johnson recovered. That was all Perry needed as he drove the Owls home, piecing together a 14-play drive, most of it with his running game. He scored from a yard out for an 18-3 lead with 2:08 left in the third.

BNL answered a little too late. Memphis Louden hit Dylan Nikirk for 17 yards, scrambled for 18 more on his own, then burst up the middle on fourth down for a 12-yard touchdown with 1:35 left. The Stars had a last-gasp chance, but the onside kick didn’t go the necessary 10 yards. The Owls flew home from there.

BNL’s option-based passing attack was drowned out. Louden was only 8 of 21 for 58 yards, with Grant Dalton catching two for 25 yards. Anderson finished with 89 rushing yards.

“All year, we’ve had the big play. We couldn’t get that tonight,” Barker said. “We had to grind out some drives.”

Perry totaled 66 rushing yards. In the first encounter, he threw for 327, with Johnson catching 10 for 175 yards. Seymour won this one the old-fashioned way.

”They had seen Jaylan, we knew they would double him,” Moore said. “But they had not seen our run attack. We had to be able to run the football.

“I was proud of how our defense was able to knock balls loose at big-time moments. That was huge for our success. It was nice having the two weeks to prepare. That always helps. We changed how we played the edge, because we knew it would be crappy weather and they probably wouldn’t pass. Our edge players were able to contain and make plays, enough to control what they did.”

And then he pumped his fist. “Win, survive advance,” he said, allowing a smile. “That’s all we can ask.”

Seymour advanced to visit New Albany in the Sectional 16 final. The Bulldogs conquered Floyd Central 28-7 in the other semifinal.

BNL, which has won only 11 postseason games in program history, will have to wait again as it seeks a second sectional title.