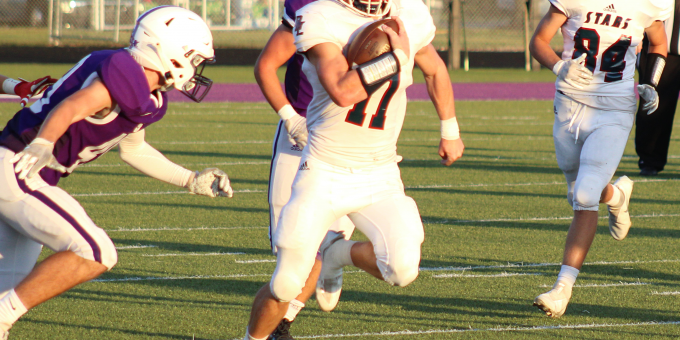 BEDFORD – Postseason success is not synonymous with Bedford North Lawrence football. With only 11 tournament wins in the program’s 48 seasons, with only one sectional championship since the current system was implemented in 1985, there is no tradition or foundation to stand on.

History does not predict the future. The Stars, with a favorable sectional draw against a previously vanquished opponent, have a chance to establish a new direction.

BNL (4-5) will tangle with Seymour (3-5) in the semifinal round of Class 5A’s Sectional 16 on Friday night. The winner will clash with either New Albany (6-3) or Floyd Central (4-6) in the championship next week. The Stars can not think that far ahead, but the path toward a different destiny has been drawn out in front of them.

Want to be remembered? Win when it counts most. The Stars have that opportunity, a home battle against a foe they’re already conquered at Seymour on Sept. 17. The bounce of the ping-pong balls during the IHSAA draw was kind, now it’s up to the Stars to take advantage.

“We talk with the senior class about wanting to leave a legacy, wanting to be remembered,” first-year BNL coach Derrick Barker said. “That would be something big. It starts with one game at a time. With only 11 sectional game victories, it would mean a lot to get No.12.”

BNL’s 35-29 triumph over the Owls six weeks ago must be factored into the equation of the rematch, although the weight of that win is questionable. The Stars featured a different look that night, with two starters serving a one-game suspension. Brye Lewis stepped into the void at quarterback and earned a hero’s reward while guiding the Stars to that victory.

Lewis ran for 164 yards and two touchdowns, threw for 196 yards and two more scores. While Seymour coach Tyson Moore had to be aware of the Lewis option (he was the QB in 2020, after all), he had scouted and prepared for sophomore Memphis Louden at the helm of the offense. Different kid, different dynamics. This time, he’ll get what he expected.

“You can’t take a whole lot from it,” Barker said. “The big thing will definitely be defense for us, some things we learned and things we have to be prepared for. I don’t expect the same game plan, but if anything it gives us some confidence.”

BNL’s defensive game plan is easy to figure out: stop Seymour quarterback Bret Perry. The sophomore hurler threw for 327 yards (completing 21 of 35 passes) and three touchdowns the first time, and his favorite target was freshman Jaylan Johnson, who caught 10 passes for 175 yards.

“The Perry-Johnson combination is the one to really look out for,” Barker said. “Perry is a good athlete, definitely a weapon with his speed. He throws the ball well. The biggest thing is he gave them a spark, and the team really rallied around him. He’s a lot like his older brother, a great athlete who plays multiple sports. He’s tough to defend.”

“You would never think a freshman and sophomore would be as prominent in a game plan as those two have been,” Moore said. “But with us being so young, it has provided an opportunity for our young guys to make plays. Jaylan just understands the game better than a lot of kids do. Bret has become our field general and provided a dual-threat attack. Those two have matured so much over the course of the season.”

The Owls are coming off a 34-0 win over Madison to conclude the regular season on Oct. 15. Perry threw four touchdown passes that night. Seymour has not had trouble scoring, averaging 30.4 points per game, but until the shutout of the Cubs, its defense was surrendering 41 points per game.

”Louden definitely provides a dual attack,” Moore said. “He is great at meshing the triple-option handoff long enough to get defenders sucked in, and then he can take it right off the edge or toss it outside. We have to stay disciplined on defense. He is a great mobile quarterback but will also beat you with his arm.”

BNL’s last performance was not its best, a 31-16 loss at Columbus East. But the Stars have had two weeks to adjust, restart and reload after getting a first-round bye for the sectional.

“With high school kids, when you can give them a few days to get their mind off football, get some space and unplug, it’s good for them,” Barker said. “It was good for us to heal up a little bit and focus on the mental part of cleaning up mistakes, what tweaks we need to make.”

The unpredictable aspect will be the weather. With rain and storms in the forecast, the team that adjusts best to the conditions will have a considerable edge.

“Weather is always a factor to consider,” Barker said. “Playing on turf might have a little less factor, but if it’s windy and pouring rain, we won’t look to throw much. That’s why we want to be geared to win late in the season, when it’s not 65 and sunny every Friday.”

If BNL wins the semifinal, it would visit New Albany in the final or host Floyd Central. Seymour will host the championship game if it conquers the Stars.

Game notes: The winner will face either New Albany (6-3) or Floyd Central (4-6) in sectional final. BNL has now only 11 postseason games in program history. Seymour has not won a sectional game since 2016. This is the first tournament game between the teams.