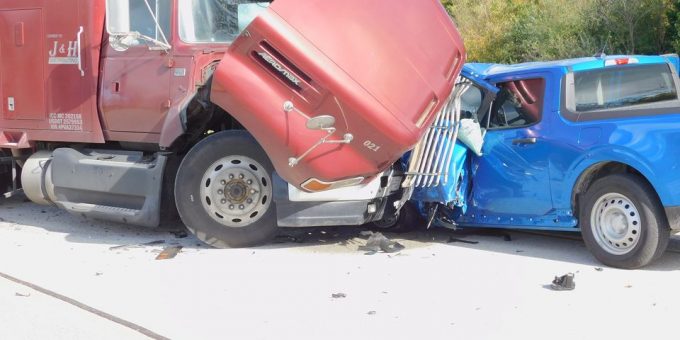 JEFFERSONVILLE – An Otisco man was rushed to University Hospital in Louisville after the pickup truck he was driving collided with a semi-truck Tuesday morning.

The preliminary investigation by Trooper Tate Rohlfing, an Indiana State Police crash reconstruction investigator, reveals that shortly after 10 a.m., a blue 2022 Ford Maverick truck driven by 28-year-old Trevor Adkins, of Otisco, Indiana was traveling north in the southbound lane of Paul Garrett Avenue in Jeffersonville.  At the same time, a semi-truck driven by Timothy Bishop, 57, of Morganton, North Carolina, was traveling south in the southbound lane of Paul Garrett Avenue.  As the two vehicles approached each other, the semi veered left into the center lane in an attempt to avoid Adkin’s Maverick; however, the Maverick also turned back into the center lane, and the two vehicles collided head-on.  The force of the crash pushed the Ford Maverick backward before the two trucks came to rest.

Adkins was extricated from the vehicle by emergency personnel with the Jeffersonville Fire Department before being transported to University Hospital in Louisville with possible life-threatening injuries.

Bishop did not sustain any injuries in the crash.

Alcohol is believed to be a factor in this crash however, officers are awaiting toxicology reports as part of the investigation.